South Korean group SEVENTEEN made their comeback on June 18 with their 8th mini-album 'Your Choice' along with the music video for the title track 'Ready To Love'. It has only been few days since the release of the album but the group has every reason to celebrate. The group has achieved another record for themselves as the album has become a million-seller. 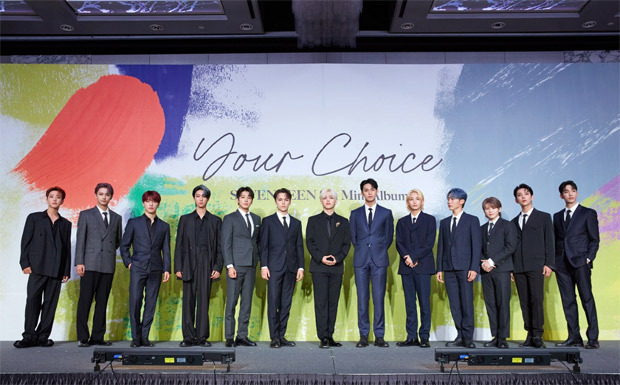 On June 21, according to Hanteo Chart, SEVENTEEN’s latest album surpassed 1,050,903 copies sold. The mini-album was released on June 18 and sold over a million copies in just four days. With 'Your Choice', the group becomes quadruple million sellers. The group achieved this status earlier with the seventh mini-album 'Heng:garæ', the special album 'Semicolon', and their third studio album 'An Ode'. As of June 23, the group has sold 1,300,000 copies on Hanteo Chart.

Now, with the group’s eighth mini-album, 'Your Choice', they continue the narrative of courageously confessing their romantic feelings to the person who brings those feelings out in them. The title of their eighth mini-album, 'Your Choice', is given from the perspective of someone who values another’s choice above their own. SEVENTEEN has redefined and broadened their mature image—one that only they’re capable of, which continues their warm way of sharing their concerns and respecting your choices and the characteristic sincerity that drives them to be honest about their feelings.

“Love is at the center of our many actions and emotions,” Joshua said during a press conference on June 18. “Whether it is self-love, love for your friends, love for your family, or even love for your pets… love is at the center of it all. Through 'Your Choice' and the Power of 'Love project we just want to show these many diverse forms in our very own unique way. Through this project, we want to make music that many people can relate to, and show a new side of SEVENTEEN that no one has ever seen before.”

“What I felt during producing the album is that we've shown you a lot of addictive music and intense performances before. With this new album, you'll get to see a new side of us,” Seungkwan said during the press conference. “We have given it so much thought and experimented a lot with new ideas so I hope that CARAT can get to feel that. I hope you will feel [comforted] while you're listening to it.”

The group is currently in quarantine. The parent company of the group, Pledis Entertainment, has put a halt to the promotions. According to their statement, one HYBE company staff and external staff tested positive for COVID-19 on June 18 and June 19. As a precautionary measure, the company has decided to postpone the promotions.

Meanwhile, the group's members Hoshi, The8, and Wonwoo and Mingyu earlier released their solo work earlier in April. The South Korean group dropped their third Japanese single titled 'Not Alone' or 'ひとりじゃない' (Hitorijanai). The single pre-released on the music platforms on April 15, 2021, and the music video released on April 18, 2021.