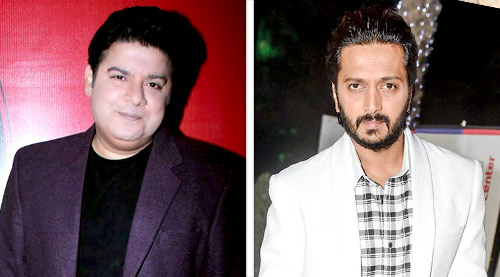 Sajid Khan, who is known for his funny one liners, is now all set to host a reality show on TV, which will feature Bollywood's best friends, who will be playing fun games and will also be sharing lesser-known facts about each other. Giving Sajid Khan company as a co-host will be his 'partner in crime' Riteish Deshmukh, who is equally known for his comic timing and one liners.

The show is titled 'Yaaron Ki Baarat' and will be aired on Zee TV, around October this year. Sajid Khan took to Twitter and tweeted "Promo shoot for a new star studded laughter dhamaka show...hosted by two best friends! @Riteishd n me @ZeeTV". Reports have it that Sajid Khan and Riteish Deshmukh will begin shooting for the show, only after the latter wraps up his promotional commitments for his upcoming film Banjo, which also stars Nargis Fakhri in the lead role.