Raveena Tandon is one of the most popular stars to have emerged on the scene in the 1990s. She recently had a reunion of that era with a list of actors like Sunny Deol, Mithun Chakraborty, Jackie Shroff and Sanjay Dutt on the sets of their upcoming film Baap. 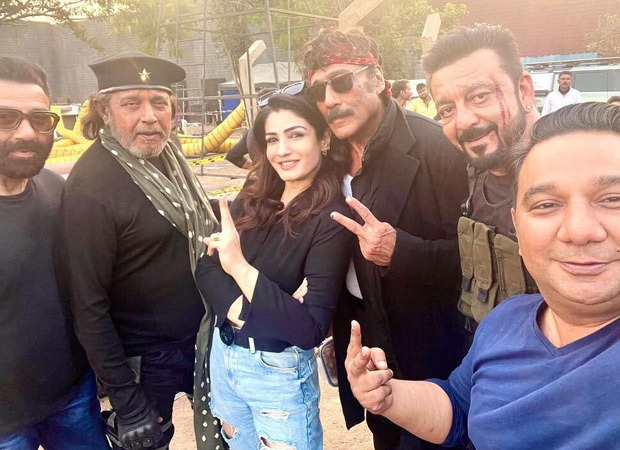 The five of them posed for a special selfie, which was clicked by Ahmed Khan, the producer of the film along with Zee Studios. Baap is directed by Vivek Chauhan. Raveena, who has worked with these stars during the yesteryear days, shared the selfie on her official Instagram page and wrote, “With mah favourite Bois! Congratulations and good going @khan_ahmedasas ! Lookin good youll! Loadsa success . #baap @apnabhidu @duttsanjay @iamsunnydeol @mithunchakrabortyofficial.”

Sunny, Mithun, Jackie and Sanjay were dressed in black, which isn’t surprising considering the action genre of the film. Raveena matched them with her top but paired it up with stylishly torn denims.

Raveena was last seen in the blockbuster KGF: Chapter 2. She played the character of India’s Prime Minister, who is at loggerheads with the film’s lead character Rocky, played by Yash. She has the film Ghudchadi.

Also read: Raveena Tandon opens up about a traumatic fan experience; claims to have received vials of blood