It was recently announced that Salman Khan and Priyanka Chopra are finally reuniting for Ali Abbas Zafar directorial, Bharat. After Mujhse Shaadi Karogi, Salaam E Ishq and God Tussi Great Ho, this will be their fourth film together. Now, it has been learned that comedian-actor Sunil Grover has bagged the film as well. 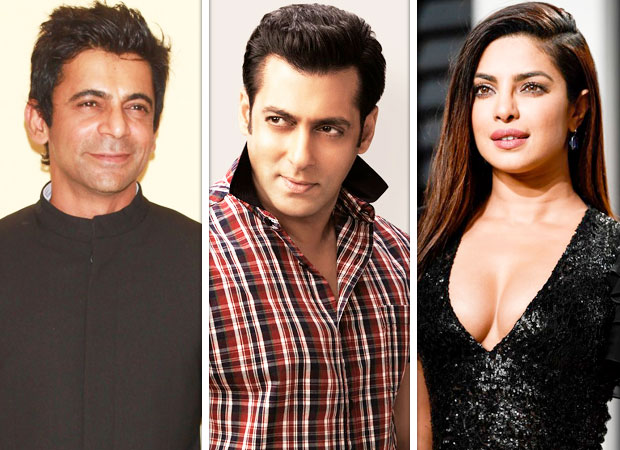 According to the latest reports, Sunil Grover will be seen as Salman Khan's friend in Bharat. The actor has reportedly had an interesting part in the film and not just a sidekick. His role won't be like other comedians who are just in the films for comic punches. He will play Salman's good friend in the film. While the actor or director has not confirmed the news, this comes as pretty good news for Sunil Grover.

Sunil Grover, who was last seen on the big screen in 2016 Blockbuster Baaghi, will now be seen playing a pivotal role alongside Salman Khan in 2019 release Bharat. The Television sensation will be seen as a part of Salman Khan's journey from 30 to 65 years. Welcoming Sunil Grover to the cast, director Ali Abbas Zafar says, "I am very excited to welcome Sunil Grover to the Bharat family. Sunil Grover is one of the most loved names in the Television industry, he has an immense fan following owing to his commendable work. Bharat has him playing a very pivotal part in the film and he along with Salman Khan is sure to create magic on screen."

Continuing the tradition of releasing his films on the festive occasion of Eid, Bollywood Superstar Salman Khan has booked the auspicious date for his 2019 release titled Bharat. Bharat's release also brings back Salman Khan and director Ali Abbas Zafar for an Eid release after the 2016 Blockbuster Hit, Sultan. The hit director-actor duo will be marking a hattrick with Bharat after their last outing Tiger Zinda Hai, the latest entry into their record-breaking association.

Just recently, we reported that Sunil Grover will be starring in Vishal Bhardwaj's Chhuriyaan. The unconventional filmmaker has found his leading man in comedian Sunil Grover. Though Sunil Grover won’t star opposite lead actresses, Sanya Malhotra and Radhika Madan, the casting for actors opposite the two actresses are still on. He will soon begin shooting for the film.

Ali Abbas Zafar has started its prep in London, after which he will move to Spain, Poland, Portugal, and Malta. The film will feature Salman Khan sporting five different looks spanning 60 years, wherein a crucial part will showcase the actor in his late 20s, looking much leaner and younger. Salman Khan will be recreating his Karan Arjun look which has created immense excitement amongst the audience.

The film is an official adaptation of 2014 South Korean film, Ode to My Father which depicted modern Korean history from the 1950s to the present day through the life of an ordinary man and events such as the Hungnam Evacuation during the 1950 Korean War, the government’s decision to dispatch nurses and miners to West Germany in the ’60s and the Vietnam War.