Bharat Movie Review: The Salman Khan Katrina Kaif starrer BHARAT is a superentertainer with emotions as its USP.

In Bollywood, a film that covers an entire lifespan of a character is very rare and is only seen in biopics. Hollywood has done that quite often in fictional films but in our cinema, it has rarely been witnessed. Blockbuster director Ali Abbas Zafar, after delivering two Rs. 300 crore grossers, is now back with BHARAT. It stars Salman Khan in the lead and he’ll be seen in various avatars as he ages through the film. The looks of the superstar has been appreciated but will these praises be there for the film as well? Will BHARAT work despite being such an atypical entertainer? Let’s analyse. 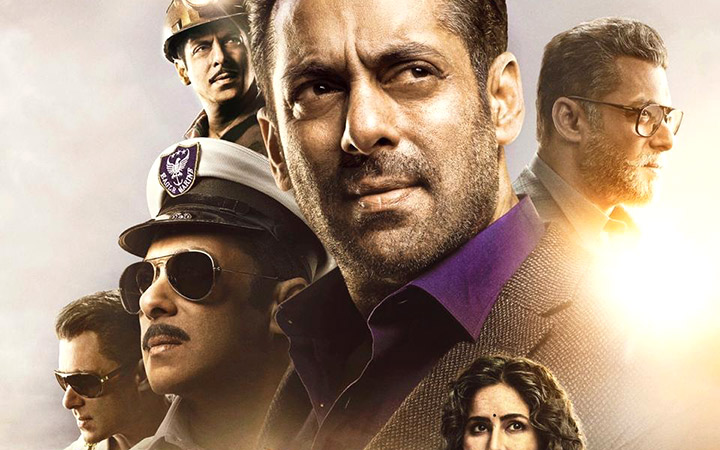 BHARAT is about the journey of a man and a nation together. The story begins in 1947 in Mirpur village near Lahore. Bharat (Salman Khan) is a kid and his father Gautam Kumar (Jackie Shroff) dotes on him. This is the time of Partition and Bharat and his family are compelled to leave for India. At the railway station, Bharat is climbing on top of the train with his sister Gudiya (Barbiee Sharma) when she falls down on the station. Gautam has already managed to safely climb atop the train but he goes down to search Gudiya. But before that, he gives his watch to Bharat and assures him that he'll be back. He also tells him to go with his mother Janki (Sonali Kulkarni), brother and sister to Gautam's sister Jamuna (Ayesha Raza Mishra)'s shop, Hind Ration Store in Delhi. Bharat and his family cross over to India and thus go to the ration shop as asked by Gautam. They are quite poor and Bharat starts doing odd jobs. Bharat soon grows up as a dashing young man (Salman Khan) and he and his childhood friend Vilayati (Sunil Grover) join a circus. Here he comes across the sizzling Radha (Disha Patani). Both Bharat and Radha get into a relationship while also doing death defying stunts. However when Bharat realises his stunts might be influencing youngsters to do the same without proper training, he quits the circus. He goes to employment exchange where he meets Kumud (Katrina Kaif) and gets smitten by her. Bharat and Vilayati are sent to Middle East to work in the oil fields. The money is good but not as much as he expected to earn. Hence, Bharat decides to work in the dangerous underground mines. Kumud who is now in love with Bharat stops him from taking up the project since she's aware that the risk is quite high. Bharat however still takes up the work. All is well at first but 21 days later, an explosion takes place in the underground mine. It seems near impossible for Bharat and his other colleagues to come out alive. What happens next forms the rest of the film.

BHARAT is based on the 2014 Korean flick Ode To My Father (directed by Yoon Je-kyoon; written by Park Su-jin). The story has been Indianized very well and the important events of post-Independence India like the death of Jawaharlal Nehru, rise of unemployment, the 1983 Cricket World Cup final, era of liberalisation and globalisation, emerging trend of redevelopment etc are well inserted in the narrative. Ali Abbas Zafar and Varun V Sharma’s screenplay is effective and keeps viewers engaged from start to finish. The emotional sequences especially are quite well written. Ali Abbas Zafar and Varun V Sharma’s dialogues are simple and sharp, and even quite funny at places.

Ali Abbas Zafar’s direction is topnotch. Unlike his previous films, this film is in a different zone but Ali handles it all like a pro. The film changes tracks every 15-20 minutes and to handle such a film is not a cakewalk. For instance, after the tragic Partition scene, the film gets a bit comic and even quite colourful in the circus sequence. The switch however happens quite seamlessly and this can be seen throughout the film. On the flipside however, the humour is forced in a few scenes and doesn’t make the desired impact. Also, the National Anthem scene seems unwarranted for and could have been written in a better way.

BHARAT begins very well, showing the 70-year-old Bharat and his life in Delhi. One might feel that the makers perhaps have shown too much at this point. But one need not worry because there’s a lot that the principal character goes through in his life and it slowly gets unveiled. The childhood portion is moving while the circus scenes are vibrant and entertaining. The real fun however begins once Bharat meets Kumud and later when he starts working in the Middle East. Till this point, there hasn’t been much conflict in the tale. But it finally enters the narrative once Bharat and his teammates get trapped. The manner in which the film goes on a high at this point is seen to be believed. The second half gets better thankfully. The scenes of the ship are quite good and watch out for how the humour is so well infused in the sequence where the pirates attack the vessel! The best however is reserved for the pre-climax. An interesting development takes place here and it’ll surely bring tears to the eyes of viewers, a la BAJRANGI BHAIJAAN [2015]. The film ends on a justified note.

Salman Khan as expected rocks the show. He is dashing and entertaining in each and every avatar. And he seems convincing in all these makeovers. In the circus scene, he’s supposed to be below 30 years ago and it comes out just right. Even as an old man, he fits the part and makes subtle changes in his speech, body language etc. His fans are surely in for a treat! Katrina Kaif looks ravishing and performance wise, she is first rate. She gets to essay a very well-written part and she does justice to it. Her conversation with Salman while munching on shawarma is quite memorable. Sunil Grover gets a lot of screen time and is almost like the second lead of the film. And he makes good use of the opportunity and would surely be appreciated. Jackie Shroff’s screen time is very limited but he has a crucial part and he makes his presence felt. Disha Patani is sizzling and has a fine screen presence. Tabu (Meher) has a powerful cameo. Aasif Sheikh (Mehek’s husband) stands out with his characterization and humour. The kid actors - Barbiee Sharma, Kabir Sajid (young Bharat), Aaryan Prajapati (young Vilayati) and Matin Rey Tangu (young Jimmy) are adorable. Nora Fatehi (Sussan) looks quite hot but is wasted. Sonali Kulkarni, Kashmira Irani (Mehek), Kumud Kumar Mishra (Keemat), Ayesha Raza Mishra, Shashank Arora (Chhote), Rajiv Gupta (Gulati) and Ivan Rodrigues (Gupta) are decent. Meiyang Chang is hardly there but his look is quite badass.

Vishal-Shekhar's music is good but could have been better. 'Slow Motion' is the top song of the lot followed by 'Chashni'. 'Aithey Aa' is well choreographed. 'Zinda' is exhilarating. 'Tupreya', 'Aaya Na Tu' and 'Thap Thap' are okay. Julius Packiam's background score is better and exhilarating, especially in the emotional scenes. Vaibhavi Merchant and Adil Shaikh's choreography is appealing, especially in 'Slow Motion' and 'Aithey Aa'.

Marcin Laskawiec's cinematography is captivating and some scenes are very well captured. Rajnish Hedao's production design is quite rich. Ashley Rebello, Alvira Khan Agnihotri, Veera Kapur Ee and Lolveen Bains's costumes are authentic and also glamorous. The ones worn by Katrina Kaif and Disha Patani stand out. SeaYoung Oh, Parvez Shaikh and Dave Judge's action is not too gory and is appropriate. Rameshwar Bhagat's editing falters in a few places but overall, it’s commendable, considerable the expansive storyline.

On the whole, BHARAT is a super-entertainer with emotions as its strong USP and Salman Khan like never before. The superb combination of Salman Khan, emotions and the release period [Eid] will ensure fireworks at the ticket windows. At the box office, it will fetch bumper profits for all concerned.

War to SURPASS Bharat and emerge as the BIGGEST Hindi opener of 2019, feels trade!

Emotion carried and the subject choosen was absolutely right for his movie. After Sultan I felt the…