Well, not surprisingly, ever since its inception, the Rajkumar Hirani directorial Sanju has been creating waves and now it has rocked the box office too. While songs like ‘Kar Har Maidaan Fateh’ have already become popular, here’s one song that wasn’t released! And it featured Ranbir Kapoor, TV actress Karishma Tanna and Raazi star Vicky Kaushal. 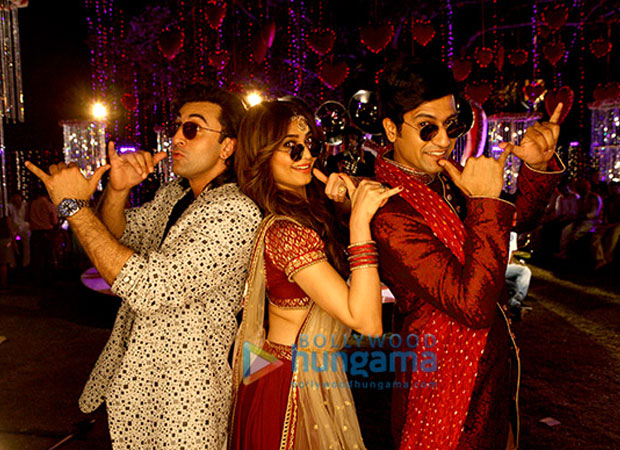 While there were earlier rumours that Karishma Tanna essayed the role of Madhuri Dixit, let us tell you that it isn’t the case. The actress is apparently playing a different character of a Gujarati woman. And this song titled ‘Bhopu Baj Raha Hain’ featured the actors having a blast and also in traditional outfits. While this picture from the song has been doing the rounds for quite some time, audiences were taken aback when it wasn’t a part of the film.

Well, the reason is that Rajkumar Hirani decided to snip it off whilst editing Sanju. It is a known fact that the filmmaker likes to retain a certain length for his film. So, when he found out that the addition of the song is extending the stipulated time he had in mind, the director reportedly decided to do away with it. However, now it seems that even though it is not a part of the film, Rajkumar Hirani has decided to release the song, albeit online.

In fact, this Rohan-Rohan composition, sung by Nakash Aziz, is also the primary tune that was part of the Sanju trailer. Karishma Tanna, who did a special appearance in Sanju, is excited about the fun party number getting a release. Thrilled about the developments, she described how it was fun shooting with Ranbir and Vicky for the number.

Sanju, also starring Sonam Kapoor, Paresh Rawal, Dia Mirza, Manisha Koirala, Anushka Sharma amongst others, is based on the life of Bollywood star Sanjay Dutt. It released last week on June 29 to rave reviews amongst critics and masses alike.

Also Read: SANJU: Is this why Karishma Tanna who is playing Madhuri Dixit in the Ranbir Kapoor starrer NOT promoting the film