Ranbir Kapoor goes a long way with Akash Ambani. They have been thickest of friends since many years now. After his twin Isha, Akash is getting married to Shloka Mehta and the Ambanis have as usual not left a single stone unturned to make the occasion as grand as possible. The family is currently in Switzerland for a pre-wedding bash and Bollywood’s who’s who have reached the venue to celebrate this occasion with Ambanis. Ranbir Kapoor is a bit of a recluse when it comes to attending big events, made sure to reach there in advance with girlfriend Alia Bhatt. In a leaked video Ranbir is seen hugging his friend and his soon to be wife and is exchanging some warm pleasantries with him and was seen genuinely happy for his friend. As per reports Alia too has accompanied with Ranbir but is not to be seen in this video. 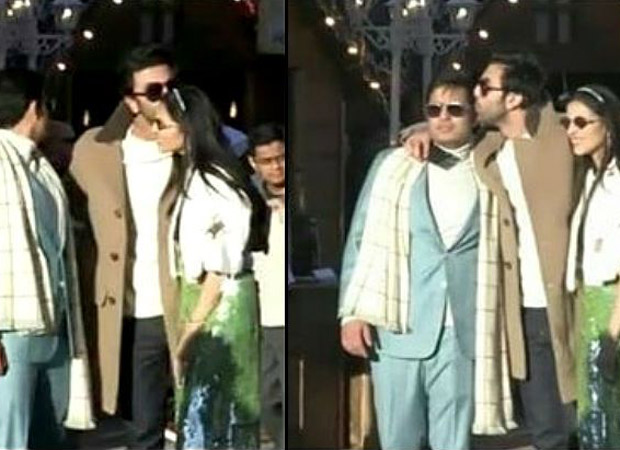 On a professional level, Ranbir is currently working on Shamshera with Vaani Kapoor and Sanjay Dutt for Yash Raj Films. He has finished important portions of Brahmastra with Alia Bhatt and Ayan Mukherji. The movie is supposed to be a trilogy and major portions of the first part have been shot. Further on, he is supposed to be doing Luv Ranjan’s movie with Ajay Devgn. Although there are no updates about the film, the makers insist that the project will roll on time.

There were rumours about Ranbir and Alia having fights after a viral video of the two stars went viral. Alia cleared the air later that they are going strong and she would even think about marriage if she thinks that her bond with Ranbir needs it.

Also Read: Ranbir Kapoor – Ranveer Singh to do a Thums Up ad TOGETHER? And wait there’s more