Manoj Bajpayee, who is currently shooting for his film Joram, was recently felicitated in Jharkand. He was welcomed by the CISF & Steel Authority of India during a function where they honoured the actor along with his film’s director Devashish Makhija and producer Anupama Bose. The function was led by Gua’s Steel Authority of India Limited, CGM Bipin Kumar Giri and President of Mahila Samiti Smita Giri. 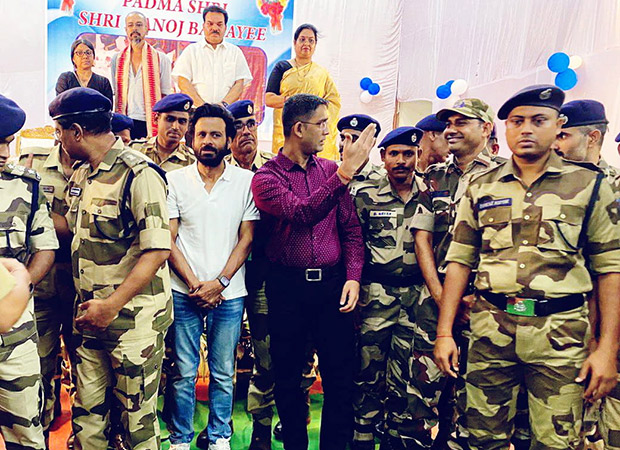 The entire area was thronged with fans tried to catch a glimpse of Manoj Bajpayee, the actor was seen greeting the crowd warmly. If reports are to be believed, he even performed his famous monologues from his hit films like Satya and Gangs of Wasseypur. He also extended his gratitude towards SAIL unit of Gua for presenting him the honour and added that he will always cherish the memory of shooting Joram in Gua forever.

Last week, Manoj Bajpayee was presented with an honour by Gua jawans. The actor was invited by the CRPF team for an interactive session with them followed by a dinner hosted by the IG & family. Videos of the same were shared on Instagram by the actor who also thanked for the CRPF jawans for special treatment given to him and his team.

On the work front, Manoj Bajpayee also has Gulmohar by Rahul Chittella co-staring Sharmila Tagore, Amol Palekar along with RSVP's Despatch which directed by Kanu Behl in the pipeline. He will also be seen in Abhishek Chaubeys’s film which co-stars Konkana Sen, Sayaji Shinde, Naseeruddin Shah in pivotal roles.