John Abraham and Manoj Bajpayee are all set to come together after Shootout At Wadala for Milap Zaveri’s next. The two actors whilst enjoying their reunion will be seen in a rather intense avatar in this film. And now news is that it has been titled Satyameva Jayate.

Does the name ring a bell? Well yes. Satyameva Jayate was a popular reality show that deals with social issue with Aamir Khan as the host. Furthermore, Aamir was also the producer of the show that has given many common people a public platform to speak about social issues and stigmas. But now, news is that Aamir Khan has shown his generous side and given Milap Zaveri permission to use the title. 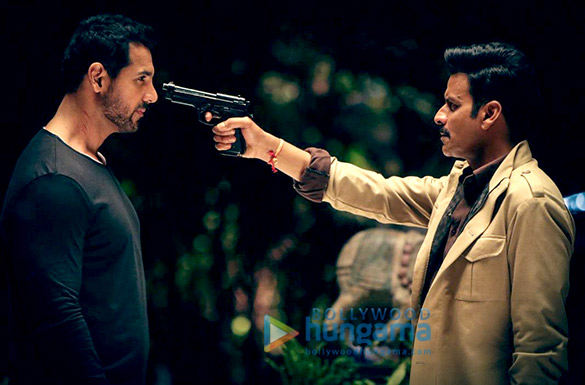 A day ago, media was abuzz with reports of Milap Zaveri successfully receiving permission from Aamir Khan to use the title for his film. However, the reason why Milap was keen on having this title for his film is yet to be known. In fact, this John Abraham – Manoj Bajpayee is expected to be a thriller with several action-packed elements.

Until they received the official permission from Aamir Khan, the team of Satyameva Jayate continued to address their film as SMJ on social media platforms.

Satyameva Jayate, produced by T-Series and Nikkhil Advani’s Emmay Entertainment, went on floor last month. The makers have also finalized the release date. Keeping up with the patriotic name of the film, it is slated to release on August 15 this year. The film also marks the debut of Aisha Sharma, sister of Neha Sharma as John’s leading lady.

On the other hand, John Abraham is quite busy with the ongoing issue related to his JA Entertainment production, Parmanu – The Story of Pokhran. The film has been under the radar since last week after the co-producers of the film, namely, John and KriArj Entertainment have been at loggerheads owing to non-payment of dues.

Also Read: PARMANU: No FIR has been filed against John Abraham says the new statement