Salman Khan and Akshay Kumar will face off each other on Eid 2020. Earlier this week, Salman made a huge announcement that he will be collaborating with Sanjay Leela Bhansali again in Inshallah which will star Alia Bhatt in the leading role. In an EXCLUSIVE interview with Bollywood Hungama, the actor confirmed Eid 2020 release. “So, I will start Dabangg 3 first. Then, Sanjay will release his film after Dabangg. Dabangg will come in December 2019 and we will come on Eid, next Eid. Eid 2020," he said. Interestingly, Rohit Shetty has also set Eid 2020 for Sooryavanshi. 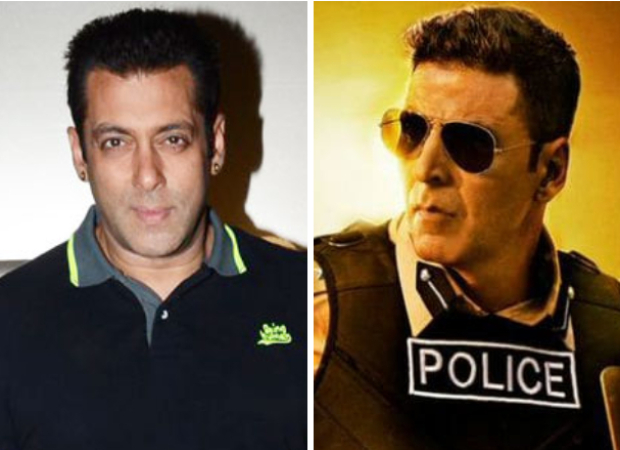 Sooryavanshi was introduced in the post-credits scene in Ranveer Singh starrer Simmba where Ajay Devgn's Singham was seen interacting with Akshay Kumar on a phone call. Rohit Shetty and Akshay Kumar had unveiled two posters of their upcoming cop drama and confirmed Eid 2020.

There were rumours that Akshay Kumar had called Salman Khan before he blocked the date for his forthcoming cop drama. Akshay Kumar, who is currently promoting Kesari, recently was asked about the speculations. The actor denied making any calls to Salman to block Sooryavanshi for Eid 2020.

It will be the second time when Akshay Kumar and Salman Khan would be facing off each other at the box office. They faced off in 2005 when their films Garam Masala and Kyon Ki released during Diwali. Akshay and Salman had starred together in films like Mujhse Shaadi Karogi and Jaan-e-Mann. They were set to collaborate on Kesari along with Karan Johar but due to unknown reasons, Salman exited the project as one of the producers due to unknown reasons.

Now, it will a battle of two superstars at the box office on Eid 2020.