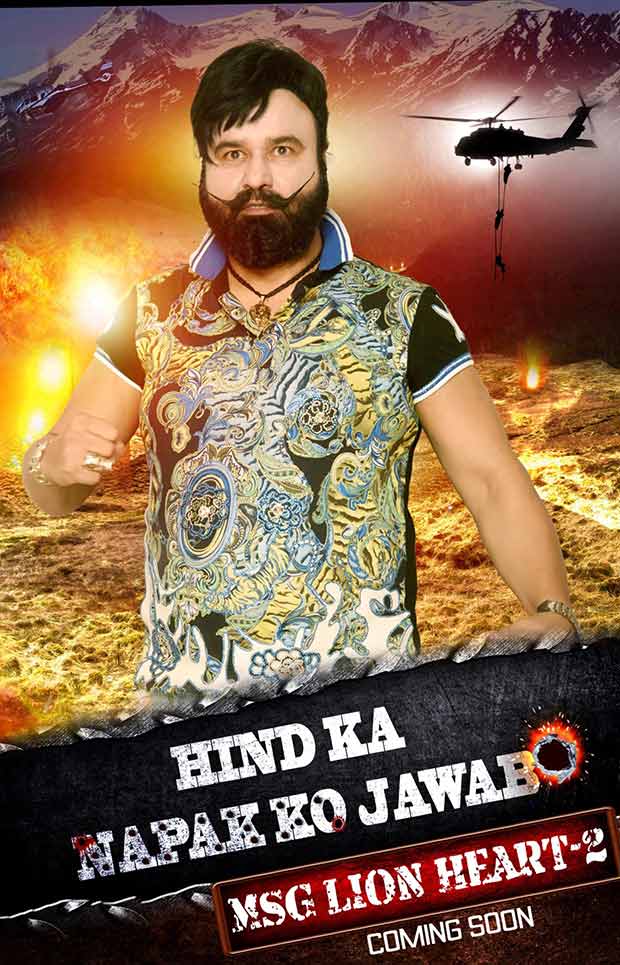 While the makers of the recently release film Lion Heart on one hand claim that their film continues its run in cinemas with packed shows throughout the country even in its 49th day and that the film has grossed over Rs. 350 crores in 5 weeks, Saint Dr. MSG has already started shooting for the sequel titled Hind Ka Napak Ko Jawaab MSG Lion Heart-2. Dr. MSG revealed the first look from Hind ka Napak Ko Jawab, where he is seen as secret agent, laced with futuristic weapons, all set to take on the enemies, through a tweet.

The movie is based on the recent surgical strike by Indian Army and resembles guerilla warfare style, which was a specialized style conducted by Rajput and Maratha warriors. Dr. MSG stated that anti-national elements are using “Jihaad” to misguide the innocent youth in these times, which had a complete different meaning in earlier days. The movie brings forth the real meaning of Jihad and will motivate youth to be more pro-active and passionate towards the serving the nation.

“It’s very unfortunate that certain sections of society seek proofs and question the credibility of the surgical strikes, and we will answer them through this movie, bringing forth many intrinsic details of the operation”, said an emotional Saint Dr Gurmeet Ram Rahim Singh Ji Insan, earlier, during the music launch event of MSG The Warrior - Lion Heart. ‘Sherdil’, as he is fondly addressed by fans now, Dr. MSG, is all set to get a new nickname as Sher-e-Hind, given the name of his character in Hind Ka Napak Ko Jawaab.

The film will be shot in exotic locales, across India from the likes Himachal, Rajasthan, Sikkim, Kerala etc will also depict a love angle, along with being loaded with action and suspense.

Revealing the progress of Hind ka Napak Ko Jawab, during a congregation held at Sirsa Ashram, to mark the birthday celebrations of founder of Dera Sacha Sauda on Monday, Dr. MSG stated that the Film’s shooting is on, at lightning speed, with almost 8-10 scenes being shot every day, given that the Baap Beti Jodi is on the job. The Film is co-directed by Honey Preet Insan, and Santosh Thundiyal will assist in DOP.