After the massive success of his movie Tanhaji: The Unsung Warrior, Ajay Devgn flew to Hyderabad to start shooting for SS Rajamouli's magnum opus RRR earlier this year. The actor will have a guest appearance alongside Alia Bhatt. The film is led by south superstars Ram Charan and Jr. NTR who play freedom fighters inspired by real-life heroes Komarum Bheem and Alluri Sitaram Raju. 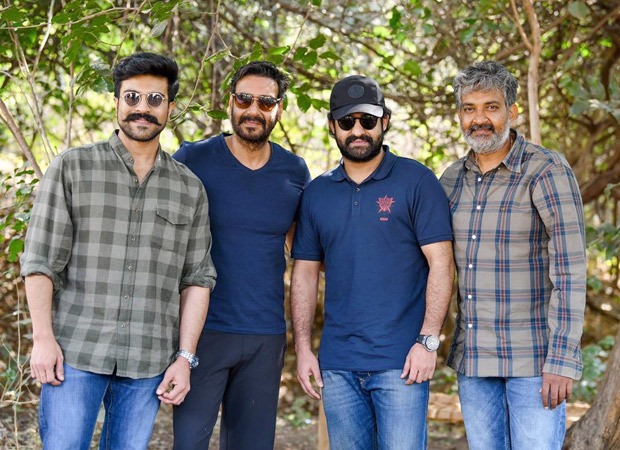 As per the latest reports, Ajay Devgn reportedly plays the role of a nationalist and will appear in flashback scenes being Ram Charan and Jr. NTR's mentor. Delhi was recreated from the 1900s at Ramoji Film City in Hyderabad where Ajay Devgn shot for 10 days. Rajamouli and Devgn remained friends after the filmmaker paid tribute to the actor in Makkhi. Ajay reportedly agreed to do RRR just a few minutes after he heard the narration.

As far as Alia Bhatt is concerned, she is yet to film her part. She plays Sita and her part is pivotal for the story. The actress has been prepping for the role and is even learning Telugu with a local instructor in order to learn the nuances of her character.

Around 25 percent of the shoot remains. With Hyderabad resuming shoots, Rajamouli will begin shooting once he receives permission and all safety measures are in place. Since the film is being made on a huge scale, there certain things that needed to be set in place. The makers are planning a two-day test in Gandipet without the lead actors.

Directed by S.S Rajamouli, RRR is produced by D.V.V Danayya on DVV Entertainment banner and is all set to hit the screens later this year in 10 languages. While it is currently set for January 2021 release, it might get pushed to April and take up the spot like how Baahubali did. This completely depends on when the shooting resumes and how long the post-production work will take.