Do you remember the performance of Thala Ajith in the film Asoka that featured Shah Rukh Khan? He played the half-brother of Asoka essayed by Shah Rukh Khan in the period drama set against the backdrop of Maurya Empire, and now, the Tamil superstar is all set to return to Bollywood, courtesy Boney Kapoor. We all know that the producer and Ajith are currently working on Nerkonda Paarvai, an official remake of the Bollywood film Pink. And now we hear that the producer is keeping on taping the passion that Ajith has for cars in his next Bollywood venture. 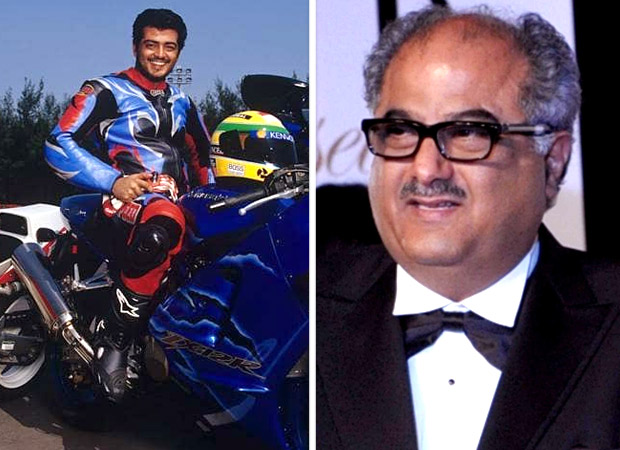 If recent reports are to be believed, Ajith who is an avid bike and car enthusiast will be seen exploring his racer side for the film. These reports also suggest that this Bollywood film will be made on an extensive scale with a humungous budget. Moreover, a long foreign schedule too has been planned for the film wherein it will be shot in Budapest, South Africa and the Middle East. In fact, reports have also asserted that the film is based on car racing too. However, the makers are currently maintaining a strong silence on the same.

Let us tell you that this untitled venture will ideally mark the debut of Ajith in Bollywood since his role in Asoka was nothing more than a special appearance. We hear that Boney Kapoor wants to pull all stops for this magnum opus Bollywood venture. And it is also being said that Ajith, who has participated in motor racing etc. has been providing inputs for the writers since he has knowledge on it. In fact, work on the film in the form of recce is expected to start this month itself and the film is supposed to be going on floors in August.

Also Read: Boney Kapoor wants South superstar Ajith to do these films with him after Nerkonda Paarvai aka Pink Remake