We all know that Boney Kapoor and South superstar Ajith are currently working together to fulfill one of the dreams of the late Sridevi. The two of them are busy with the film Nerkonda Paarvai which is produced by Boney Kapoor and it stars Ajith in the role of a lawyer. The film, which is the Tamil remake of Pink, will be getting them together for the first time and now, Boney Kapoor has expressed his desire to work with the actor in his forthcoming projects. 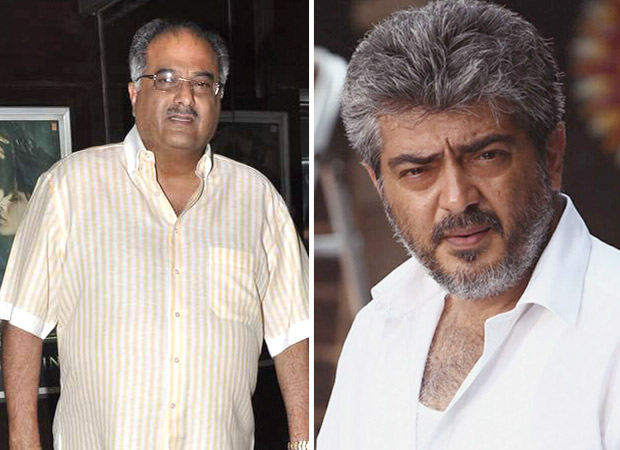 In fact, Boney Kapoor has taken to Twitter to share his wishes. While the producer is more than happy to have Thala Ajith on board for his Nerkonda Paarvai and is all praises for his talent, he has also revealed that he has scripts ready for the South actor if the latter is ready to come on board. He tweeted about it saying, “Saw the rushes of @nerkondapaarvai. Happy… What a performance by Ajith…I hope he agrees to do Hindi Films soon. Have 3 action scripts, hope he says yes to at least one of them”

Saw the rushes of #NerkondaPaaravai. Happy... What a performance by Ajith.... I hope he agrees to do Hindi films soon. Have 3 action scripts, hope he says yes to atleast one of them. #NerkondaPaaravai #Ajithkumar

A source close to them said, “Interestingly, this has sparked a strong speculation around South superstar Ajith’s Hindi film with producer Boney Kapoor and looking at their camaraderie, a Hindi film announcement will not be a surprise. It will surely be a treat for film lovers. Ajith’s last film Viswasam has smashed all box office records in Tamil.”

The source added, “It was the Late Sridevi’s desire that her husband Boney ventures into the Tamil cinema. Ajith helped fulfill her wish and agreed to do not one but two Tamil films for him.  It would be a role reversal in Hindi where Boney is ready to welcome Ajith.”

Well, now that Boney Kapoor has expressed his wishes, Ajith is yet to respond to his suggestions and fans have been quite eagerly awaiting the answer of the superstar.

Also Read: Nerkonda Paarvai: Vidya Balan has a special message for Boney Kapoor after working with him in Pink Remake