Stationed in the idyllic hills of Mussoorie for the past few weeks, the team of Forensic including leading duo Vikrant Massey, Radhika Apte, actors Prachi Desai and Vindu Dara Singh along with the producers Deepak Mukut, Mansi Bagla, Varun Bagla, and the entire team of the film met the Uttarakhand CM. Chief Minister of Uttarakhand - Shri Pushkar Singh Dhami was kind enough to spare an hour from his tight schedule to meet with the cast and crew of the film. 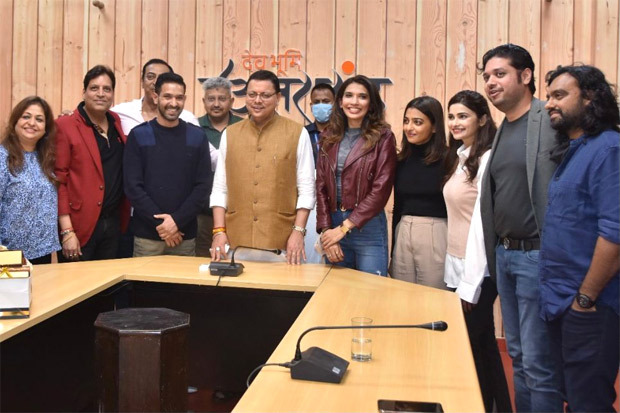 Director Vishal Furia tells us, “Shooting in Mussoorie has been a dream. With locals stepping in to support at every step along the way, we have had a smooth sailing shoot without any glitches. Even when we shoot in market areas, the civic authorities ensure we are not disrupted and often volunteer for crowd management. As the CM Pushkar-ji, sets the tone and we were thankful that he and his people have been such warm and gracious hosts."

Producer Deepak Mukut believes that this film could pave the way for more shoots to happen in the hills. He adds, “It was an insightful meeting and a privilege for us. The kind of on-ground support rendered by the local authorities is only going to invite more producers to shoot their films here. In post COVID times, the safety of the crew is of utmost importance and Uttarakhand has been a safe haven in that sense.”

Producer Mansi Bagla also highlights the inviting infrastructure of the state, for which she thanked the CM and his team. “Having the support of a Chief Minister in a state where we are shooting is so helpful. Local authorities like police and other departments are so proactive, friendly, and quick with permissions which enables us to finish the shoot on schedule. I am mesmerised with the beauty of Uttarakhand and it was an honour to meet Shri Pushkarji who is such a humble and supportive man.”

Forensic is directed by Vishal Furia and produced by Deepak Mukut, Mansi Bagla, and Varun Bagla under their banners of Soham Rockstar Entertainment Pvt. Ltd.,& Mini Films, and co-produced by Hunar Mukut.