Thugs Of Hindostan makers released the motion poster of Aamir Khan’s much awaited first look from the film and we were shook! Aamir’s character is named Firangi in the film and his Maverick hairstyle and wacky look was compared with Johnny Depp’s numerous on screen personas including Jack Sparrow and Mad Hatter. All said and done, the look garnered a lot of publicity and hype for the film. Yash Raj Films has been releasing one look, one day at a time since last week and finally they released the film's leading man’s look. Post this, there has been a poster doing rounds with all the leads in one frame. 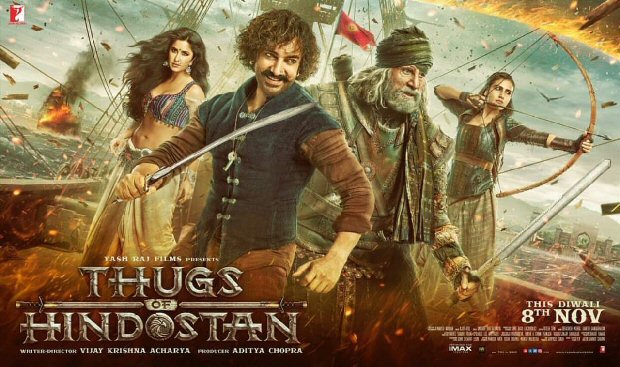 The makers have definitely not released it which makes us wonder about the authenticity of it. But it has Aamir Khan as Firangi, Amitabh Bachchan as Khudabaksh, Fatima Sana Shaikh as Zafira and Katrina Kaif as Suraiyya.

Check out the poster and tell us what you feel. Thugs of Hindostan is one of the most awaited films of this year and is slated to release on November 9. It is an action packed period film directed by Vijay Krishna Acharya and produced by Yash Raj Films. The film boasts of epic war scenes and jaw dropping action sequences. It is also hyped because for the first time ever, we will get to see Aamir sharing space with legend Amitabh Bachchan. The film has been shot in Malta and Rajasthan.