Yash Raj Films' Thugs of Hindostan is the biggest visual spectacle hitting the big screen this Diwali. It boasts of a larger than life, never seen before action extravaganza and an incredible casting coup that brings together two of the biggest legends of Indian cinema, Amitabh Bachchan and Aamir Khan on screen for the first time. 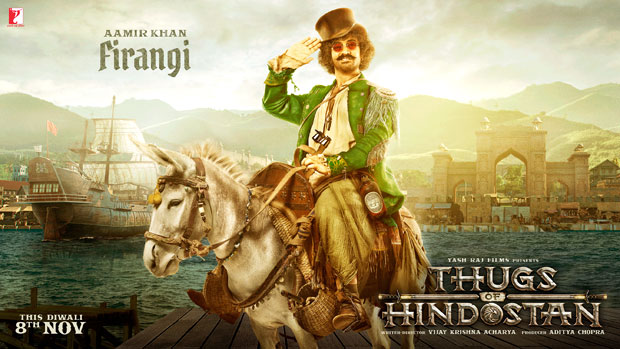 In keeping with the innovative marketing move to introduce the primary characters of the film through motion posters, YRF today unveiled Aamir Khan's first look today and it looks pretty intriguing. His look was unveiled on Monday morning in just the way last ones were unveiled. His character name is Firangi who looks like a quirky character. He is wearing dhoti, kurta with a bright green jacket. Giving a salute in the motion poster, the long hair, shades with cowboy hat as he rides a horse is pretty interesting. With the motion poster, he wrote, "और इ हैँ हम, फिरंगी मल्लाह. हम से ज्यादा नेक इन्सान इस धरती पे कहीं नहीं मिलेगा आपको. सच्चाई तो हमरा दूसरा नाम है, और भरोसा हमरा काम.
दादी कसम !!!"

Earlier this week, the makers unveiled the fierce warrior look of Fatima Sana Shaikh who plays the role of Zafira in the film. Amitabh Bachchan’s first motion poster was unveiled in which the actor donned a pretty intriguing look as Khudabaksh. The villain John Clive played British actor Lloyd Owen made his way to Bollywood with his pretty intriguing look of a merciless ruler. Just a day ago, the leading lady Katrina Kaif was also introduced as Suraiyya who is the most gorgeous girl in British India who makes every man go weak in their knees. She is the best dancer in the country that people throng to watch.

Thugs of Hindostan is the most anticipated film releasing this Diwali. The film is set to treat audiences across age groups with the biggest jaw-dropping action sequences seen by audiences on screen to date. With its edge-of-the-seat thrills and an epic adventure and war on the seas, the film is set to light up this Diwali.

YRF’s mega action entertainer, Thugs of Hindostan, is set to release on November 8, a national holiday.