Last Updated 26.11.2022 | 9:47 PM IST
feedback language
follow us on
Bollywood Hungama » Movies » Movie Reviews » Thugs Of Hindostan Movie Review: The Aamir Khan starrer Thugs of Hindostan has some engrossing moments in the first half, that's about it. This one is a golden opportunity lost, a KING-SIZED DISAPPOINTMENT!

Thugs Of Hindostan Movie Review: The Aamir Khan starrer Thugs of Hindostan has some engrossing moments in the first half, that's about it. This one is a golden opportunity lost, a KINGSIZED DISAPPOINTMENT.

A Diwali release is an event in itself. And this year, Amitabh Bachchan and Aamir Khan team up for the first time in the hugely awaited THUGS OF HINDOSTAN. 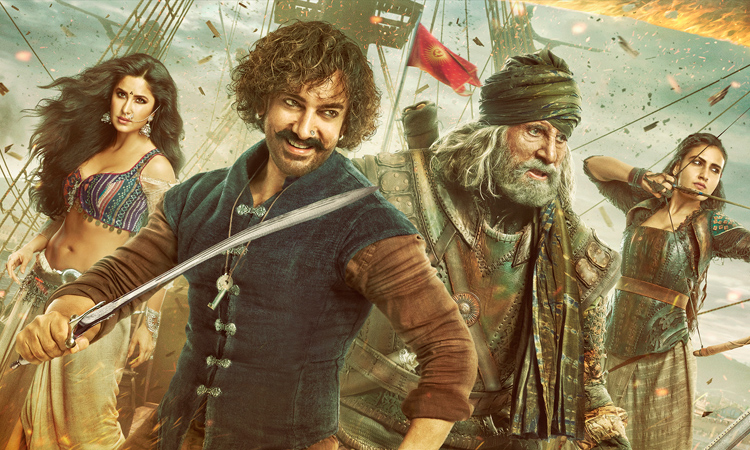 Let's come to the point right away. Does THUGS OF HINDOSTAN manage to live up to the monumental expectations? Or does it turn out to be a shocking disappointment? Unfortunately, the film is a king-sized disappointment.

THUGS OF HINDOSTAN is the story of a group of rebels fighting the British. The year is 1795. The kingdom is ruled by a benevolent king [Ronit Roy]. The evil Clive [Lloyd Owen] annexes the kingdom by treacherous means and kills the king and queen.

The king's guardian, Khudabaksh [Amitabh Bachchan], escapes with the king's daughter Zafira [Fatima Sana Shaikh]. 11 years later, Khudabakash, Zafira and their gang are now considered thugs. They have wrecked havoc in the lives of the Britishers.

With no other option in hand, Clive summons Firangi Malla [Aamir Khan] to trace the whereabouts of Khudabaksh. Firangi is a devious character and it's difficult to trust him. Betrayal is his second nature by his own admission.

With the help of his friend Shanichar [Mohd Zeeshan Ayyub], Firangi devises a plan and enrols into Khudabaksh's army. What happens next?

To start with, the story is formula-ridden and utterly predictable. The writer could have done so much with the content but, sadly, he lets go of this golden opportunity. The screenwriting has some moments [especially in the first half], but the narrative loosens the grip as it progresses. Worse, too many cinematic liberties and a lifeless second hour act as roadblocks. The dialogues are interesting, especially between the senior actors, but they are few and far between.

Vijay Krishna Acharya's direction is shoddy. Frankly, with such poor written material on hand, the director couldn't have salvaged the show either. However, he does manage to make an impact in a few sequences...

*Firangi's entry and the sequences between Firangi and Khudabaksh in the first hour are worth recalling.
*Khudabaksh's entry would be greeted with seetis and taalis. Even Firangi Malla's introduction is funny and keeps the interest going.
*The interval point and prior to that, the confrontation and action sequences involving the two actors is engaging.

Manoj Kumar's multi-starrer KRANTI, released in 1981, 37 years ago, remains a far more interesting and hugely entertaining movie made on the subject [a group of rebels fighting the Britishers]. That film boasted of memorable songs that hold tremendous recall value to this date.

Ajay-Atul's music is a letdown. The supremely talented composers are not in form this time. Background score is jarring. Cinematography is stunning. Action sequences are well executed. Production design is top notch. VFX should've been better. Editing is uneven. The film could've done with a shorter run time.

Aamir plays to the gallery, but is letdown by the writing. Also, at places, he tries too hard to be funny. Amitabh Bachchan delivers a powerful performance and towers above all. Fatima Sana Shaikh fails to create the desired impact. Katrina Kaif is hardly there, barring two songs and a few sequences.

Mohd Zeeshan Ayyub hams to the hilt. The two Britishers are caricaturish. Ila Arun is wasted. Ronit Roy is decent. Sharat Saxena gets no scope.

On the whole, THUGS OF HINDOSTAN has some engrossing moments in the first half, that's about it. The post-interval portions are an absolute downer. The plot is formulaic, while the screenplay is riddled with cinematic liberties. At the box-office, TOH is bound to have a huge weekend thanks to the festive period coupled with tremendous hype and the impressive names involved. But once the initial euphoria settles down, it'll be difficult for the film to sustain. This one is a golden opportunity lost, a KING-SIZED DISAPPOINTMENT!

Aamir Khan reveals why he apologized for Thugs Of Hindostan failure

what a waste of resource and talent .. Without a continuity in the script this is one bad excuse…

Please Watch ‘Baazaar’ or ‘Andhadhun’ instead of this torturous epic disaster! No Content, Such an…