Last month, we had reported that Rakul Preet Singh is being considered to play the role of the late Sridevi in the forthcoming NTR biopic. The film based on the life of actor-politician Nandamuri Taraka Rama Rao, already has actors prepping for their respective roles. While NTR’s son Balakrishna Nandamuri will essay the lead role, Vidya Balan plays the role of the actor’s wife Basavatarakam. And now, Rakul will play the iconic actress who has been an integral part of NTR’s film career. 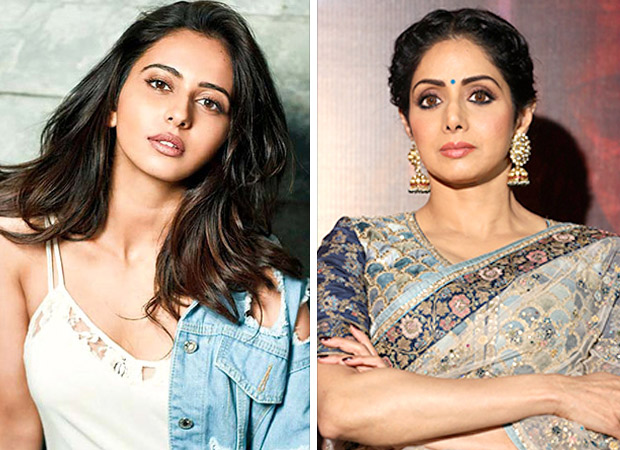 It is a known fact that Sridevi has not just been a Bollywood superstar but also South superstar. She has acted in many films down South including Telugu language. During the NTR reign, the actor has collaborated with the actress for as many as 14 films together. And they were considered to be one of the most popular onscreen jodis. On the other hand, it is also being said that NTR played an important role in shaping Sridevi’s career. Hence, the makers deemed it necessary to portray the character of the actress in the biopic.

For the same, Rakul Preet Singh was approached for the role. The actress, however, was expected to have a busy schedule as she has been shooting for four films. So, it was being said that she has been contemplating on the offer then. But considering that Rakul is a huge fan of Sridevi, she didn’t want to let go off the opportunity and decided to give a nod for NTR biopic. So despite the hectic work commitments, the actress will soon be sitting with the team to work out on the dates.

Producer Vishnu Induri recently stated in media reports that the portion of Sridevi in the film is nothing more than a special appearance. The makers will just touch upon this aspect and a song and a few scenes of that era will be a part of this biopic.

Besides these three actors, other actors like Rana Daggubati and Jisshu Sengupta too play integral roles in the film. In fact, Rana will be playing the role of Chief Minister of Andhra Pradesh, Chandrababu Naidu.