Amid all the chaos around the remake version of ‘O Sajna’, Neha Kakkar and Falguni Pathak playing Garba and Dandiya have left netizens confused. For the unversed, days after the release of the Neha Kakkar track, Falguni Pathak slammed the makers of the song while revealing that she wanted to sue them. While the debate on the matter is making rounds on the internet, singer Sona Mohapatra has jumped into the conversation and defended her contemporaries. 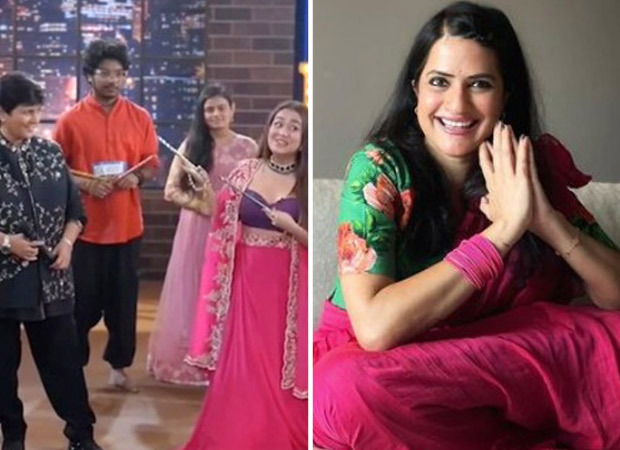 Before voicing her opinion, the ‘Ambarsariya’ singer shared a tweet bashing Bollywood music. In her tweet, Sona wrote, “the constant showcasing of a lack of courage to back new compositions, songwriters, disrespecting creators, writers has destroyed the fabric of what made #Bollywood music culturally relevant.The horror of the Sri Lankan ‘Manike Mage’ remade, case in point2. Puke worthy for me.”

The ‘Jiya Laage Na’ singer shared another tweet, in which she addressed Neha Kakkar and Falguni Pathak’s feud while commenting on people assuming that Neha-Falguni’s online tiff was nothing but a “publicity stunt”. Sona’s tweet read, “& why are people so silly that they’re buying into the PR release of a reality show trying to ride the #FalguniPathak news cycle & discredit her reaction as a publicity stunt? Don’t they know that such shows record episodes much in advance & she must not have a clue then?”. 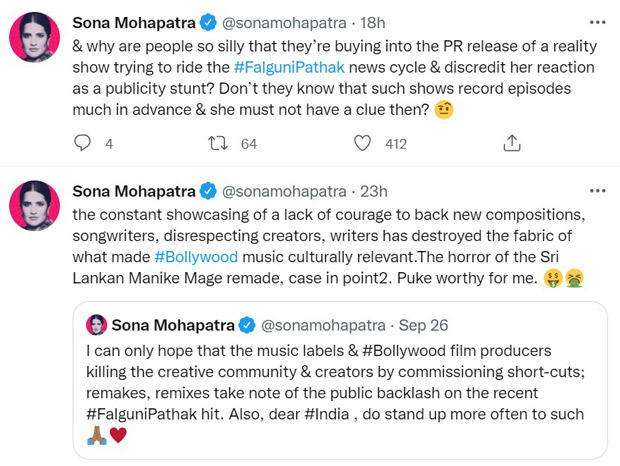 Meanwhile, Hindustan Times has also published a report quoting the team of Falguni Pathak. An insider told the publication, “This particular segment was shot during the auditions round. It was shot in August. The timing is all coincidental. They shot the chunk for Navratri. In fact, at that time, Neha and Falguni were quite cordial. Currently, Neha doesn’t even wish to talk about Falguni and was quite clear that she won’t promote the particular episode or talk about what it was like to have Falguni on the sets”.