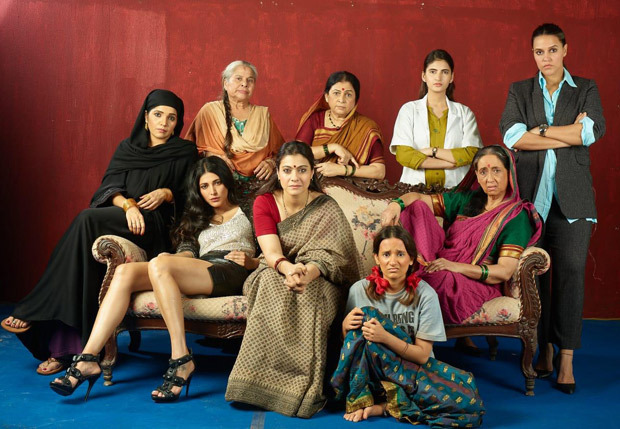 Shot in 2 days, Devi is Kajol and Shruti's first short film ever. Devi is the story of nine oppressed women, from different strata of society, living a small room, faced with the dilemma of sharing their space and stories in a country all too used to tragedy & pain.

Barring the producers, Niranjan and Ryan, the art director, Sriram Iyengar (Bajirao Mastani, Namaste England & Tanhaji - The Unsung Warrior), most of the crew was an all-women crew; Sarita Singh as DOP and Line Produced by Ritika Bajaj of Indian Storytellers.

Kajol says, "I couldn't have chosen a better subject than Devi for my first short film. It's a powerful statement, written very well by Priyanka. It's a poignant film, one that needs to be shared with the world, especially today. My character, Jyoti, is vastly different from me in many ways, but uncannily we share a lot too. In today's times when gender discrimination, abuse, and violence is being spoken about vociferously, films like Devi are far more relevant and I am glad to have got the opportunity to participate."

Shruti Haasan says, "I loved the concept of the film when I heard it. We often talk about sisterhood and how women need to stand with each other. Devi highlights that aspect in such a lovely way, with such a powerful message. It's disturbingly poignant and that's why I knew I had to be part of it, and I couldn't have found a more perfect film to make my debut on the digital platform!"

Neha Dhupia adds, "Sometimes as an actor you work in a film for the part that's offered to you and sometimes for the story you are helping the director tell, with Devi it was definitely the latter. Niranjan, Ryan, and Priyanka narrated Devi to me and as soon as I heard it I was certain that this is a narrative I want to be a part of... it got me thinking about the world we are living in and how as women we need to help other women. It’s strong it’s impactful and it gives you the chills. And it also reminds you how through the fragility of life as women we don’t have a choice but to stay strong. The part that stayed with me the most was most definitely the amazing women who worked on the project, and without revealing much I’d have to say the ending . Devi really is a film and a subject that stayed with me for the day even after we wrapped the shoot on it."

Neena Kulkarni says, "The script is moving and layered. I could actually see it unfolding before my eyes, as I read it. I was fascinated with the depth of each character, their interactions, and space where the story takes place. And I chose to be a part of it because it makes a strong comment on one of the most horrific crimes committed against women to date."

Mukta Barve adds, "Devi means a lot to me on so many levels. I feel that the subject of violence against women needs to be discussed in-depth, and I have tried to be part of the discussion through some of my projects as well. All the women in this story have suffered violence, irrespective of their social class, regardless of their ages. By shining a light on it, the film says that violence cannot be accepted as a norm, It has to stop. I am especially glad that Niranjan and Ryan chose to make this film. They have done a great job, and I was really happy to be part of this project."