It’s been almost half a decade since Bhaiaji Superhit was announced. The film that was stuck to several crises, we hear, is now back. Whether it is with a bang or no, the box office will decide. Bu as of now, we got a glimpse of all the characters who will be a part of the film. Starring Sunny Deol, Preity Zinta and Ameesha Patel in the lead, Bhaiaji Superhit is directed by Neeraj Pathak.

In 2016, it was revealed that Bhaiaji Superhit is back on track with many glimpses being released online. Now the makers have even locked the release date in September this year. Indeed, it seems that this Sunny Deol starrer will see the light of the day shunning reports of the film being shelved. 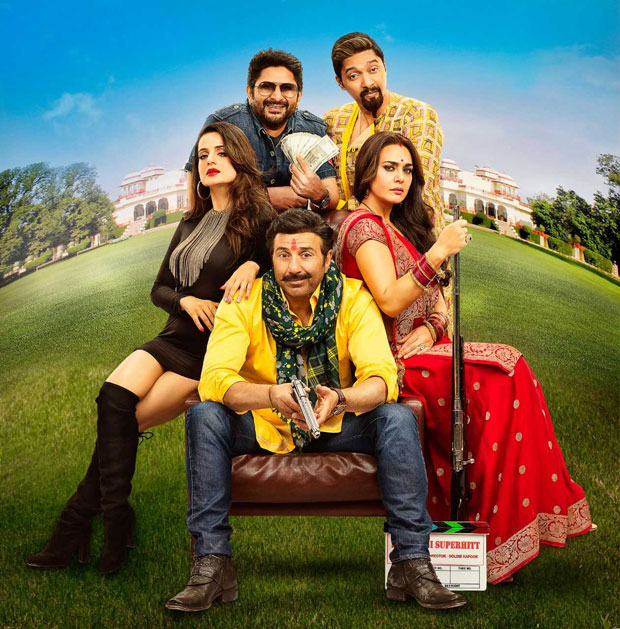 Speaking on the poster that features the characters from Bhaiaji Superhit, it is a known fact that Sunny plays a gangster aspiring to be a Bollywood star. Earlier we had mentioned that Preity Zinta essays the role of Sunny’s wife and it was also being said that her character will be quite aggressive.

As for Ameesha Patel’s role, we already know that it will be a glamorous role, since she plays the role of an actress. Another interesting fact about the film is that Sunny Deol will be seen in a double role in this film and that too for the first time.

Bhaiaji Superhit is an action comedy with an interesting amalgamation of two completely different worlds that is Bollywood and underworld. Set against the backdrop of Uttar Pradesh, the film is a funny, hilarious, colourful and larger than life yet emotional story.

Besides the trio, Bhaiaji Superhit features an ensemble cast. It comprises of Arshad Warsi, Shreyas Talpade, Sanjay Mishra Brijendra Kala, Jaydeep Alahwat, Pankaj Tripathi, Mukul Dev among others. And the release date has been scheduled as September 14.