The last decade saw the emergence of the action comedy genre. Rohit Shetty exceled a lot in this genre as most of his films had action coupled with some fun moments. Besides, SINGH IS KINNG [2008], READY [2011] KHILADI 786 [2012], DISHOOM [2016] etc. were some of the popular action comedies that worked for the audiences. Sunny Deol, who also toyed with this kind of cinema in YAMLA PAGLA DEEWANA franchise, is now back with another action comic fare, BHAIAJI SUPERHIT. This film has been in the making since almost five years and faced lot of obstacles. Now that it releases finally, does BHAIAJI SUPERHIT turn out to be an entertaining ride? Or does it fail to deliver? Let’s analyse 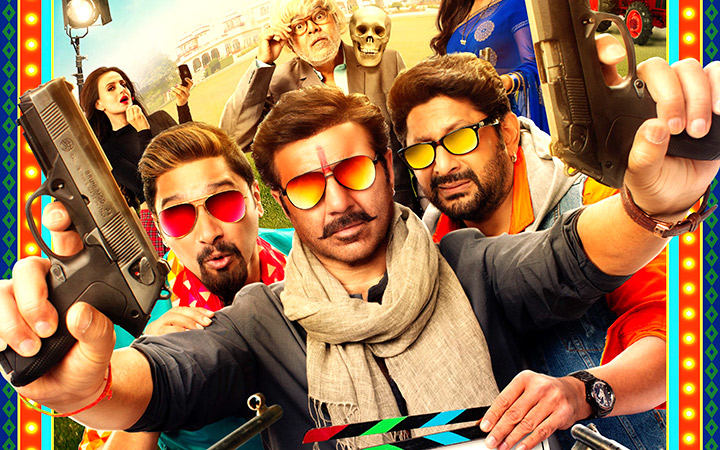 BHAIAJI SUPERHIT is the story of a gangster who enters into films. Devi Dayal Dubey aka Bhaiaji (Sunny Deol) is a goon with a heart of gold based in Mirzapur, a town close to Varanasi, Uttar Pradesh. He’s married to the dynamic Sapna Dubey (Preity Zinta) who leaves him after she suspects Bhaiaji of having an affair with the widow of a deceased fellow gangster. Eight months pass and Bhaiaji is depressed and is unable to focus on his work. His team therefore take him to a psychologist, Dr. Gyan Prakash Buddisagar (Sanjay Mishra). He tells Bhaiaji that Sapna won’t like if his work suffers and people start ridiculing him as a result. He motivates him to become popular not just in his town but the whole of India. Bhaiaji hence decides to get into films. Meanwhile, in Mumbai, Goldie Kapoor (Arshad Warsi) is a director who also cons producers of their money smartly. He’s kidnapped by Bhaiaji’s men and compelled to make a film on his life. Realizing that Bhaiaji is super-rich and in this vulnerable state, he can be fooled into passing millions to him, Goldie agrees. He then brings a writer, Tarun Porno Ghosh (Shreyas Talpade) to script the film and the hot and cunning Mallika Kapoor (Ameesha Patel) to essay the role of Sapna. While Bhaiaji is busy in the making of the film, his rival, Helicopter Mishra (Jaideep Ahlawat) is trying to usurp his place and establish himself. What happens next forms the rest of the film.

Neerraj Pathak’s direction is inconsistent and messy. There are far too many characters and subplots and the manner in which he has stitched everything together is horrible. To add to it, the script is flawed and his execution further ruins the impact.

BHAIAJI SUPERHIT has a very awful beginning as the title song is played during the beginning credits and it is interspersed with an unintentionally funny action scene. One can make out that the said action sequence was not initially intended to be a part of the track and was forcefully added. In fact, this film which has been in the making since several years seems dated and at places, there are also continuity issues. Thankfully, the makers waste no time in getting straight to the story but the various situations don’t really add to the fun. A few scenes elicit laughs – that’s it. Post-interval, the makers add a plot twist by introducing Bhaiaji’s lookalike, Funny Singh (Sunny Deol), but it adds nothing the story. The villain's track, meanwhile, is quite silly and in the action scene in the finale, all logic and sense is thrown out of the window.

Sunny Deol is not in top form. However, he sails through the film. He has a great comic timing and when it comes to action, he’s first-rate as we all know. In both these departments, he manages to do well but on the whole, it’s sad to see him doing such badly written films this year, from YAMLA PAGLA DEEWANA PHIR SE to MOHALLA ASSI to now BHAIAJI SUPERHIT. Preity Zinta gets to play a ‘Dabangg’ character in her comeback film and does a fine job. The character didn’t deserve this film and would have worked wonders in some other comic caper. Her attempt at humour and showing her vulnerable side is nice and would be lapped up by her fans. Arshad Warsi is the reason why the film is mildly funny. He gets to play a great role and rises above the substandard script. Shreyas Talpade is also fine but gets limited screen time. Ameesha Patel looks quite sizzling but performance wise, she is average. Sanjay Mishra, again, is a funny character but is under-utilized and given some very bad dialogues to mouth. Pankaj Tripathi (Builder Gupta) is hardly there and is nothing special. Jaideep Ahlawat puts in genuine effort but is made a caricature in the end. Brijendra Kala (Chacha ji) is decent. Hemant Pandey (Charsi bhai) is strictly okay and his character is sure to bewilder audiences. Throughout the film, he’s shown to be just another gang member but in one particular sequence, he’s presented as a drug addict and this is when the audiences are told that his name is Charsi Bhai. It’s clear that this scene was an afterthought and added later on. But in the process, it’s shocking that they changed the nature of a character. Pankaj Jha (Chairman Gajendra Singh) tries to be funny but fails. Same goes for Amit Mistry (Lucky Singh Lapata). Manoj Joshi (Inspector Arun Ghosh) is introduced well and it seemed like he’ll have an important part to play. But after his entry scene, he’s never shown again and only mentioned once. Ranjeet (Sapna’s father) is added for the heck of it. Mukul Dev (Bhaiaji’s gang member), Rajeev Mehta (disgruntled producer), Nawab Shah (henchman), Hanif Halal (Helicopter Mishra’s gang member) are wasted. The end credits mention Lillete Dubey’s name but she is nowhere in the film. Her scene must have been axed but the makers forgot to remove her name from the rolling credits!

Music is nothing special. 'Sleepy Sleepy Akhiyan' is the only song that looks decent and well presented. 'Do Naina' comes next. 'Om Namah Shivay' is horrible and Sunny Deol’s dance is bound to raise unintentional laughs. 'Naam Hai Bhaiaji' as said before is poor and same goes for 'Baby Jaanleva Hai'. Vijay Verma, Anamik and Lyton's background score is loud. Vishnu Rao and Kabir Lal's cinematography is nothing special. The film is set in Uttar Pradesh but many scenes are shot in Mumbai, as evident by the skyline and skyscrapers in the background. S Vijayan's action is a bit gory and even silly. Muneesh Sappel's production design is quite okay. Ruchika Paanday, Manish Malhotra and Rocky S's costumes for Preity Zinta and Ameesha Patel are quite appealing. Sandeep Francis's editing is very haphazard. The film, it seems, was quite long and the makers tried to bring down the duration but the end result was bad.

On the whole, BHAIAJI SUPERHIT adds to list of disastrous films of Sunny Deol in recent times. This dated film suffers from lazy and inconsistent execution, bad writing and unfunny moments. At the box office, it is bound to flop.

#2018Recap: 18 most embarrassing scenes and dialogues in Bollywood films this year