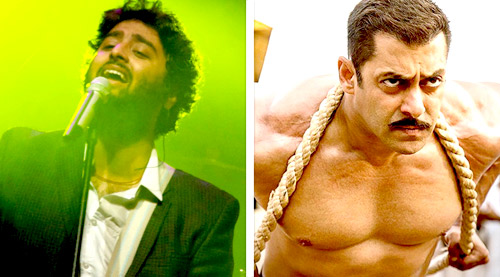 Singer Arijit Singh's well-intended, but, woefully mistimed public apology to Salman Khan seems to have had a positive effect.

Not one to forgive easily, this time, Salman has relented. Arijit's song in Sultan, which the singer so desperately pleaded to be retained, will apparently not be dropped.

To flashback to the root of the rancour...apparently, at an awards function Salman Khan had said that Arijit's song 'Tum Hi Ho' in Aashiqui 2 puts him to sleep. To this, Arijit had reacted with a smirky, 'Nice!'

Says a source close to the development, "Arijit over-reacted. Salman's anger was not directed at Arijit. Salman was actually pissed off at an awards function by Mithoon (the composer of the Aashiqui 2numbers) who had reacted rudely to Salman's remarks."

Apparently, after Arijit's public apology, the song in Sultan will be retained. Says a source, "It's not been decided whether Salman will agree to lip-sync Arijit's song. But, the song won't be removed from the soundtrack."