Superstar Salman Khan is a darling of the masses and has been having a great run at the box office. Even his underperforming films easily go past the Rs. 100 crore mark. At the same time, however, there’s a fear that if he keeps delivering not-so-impressive films on a regular basis, it can affect his credibility and ultimately, his box office track record as well. The manner in which his recent flick Dabangg 3 failed to set the box office on fire has especially heightened this concern. Fortunately for Salman Khan, he is getting some very interesting offers from many talented directors and producers. Not just that, these subjects are entertaining and yet different from the massy films he has done off late. 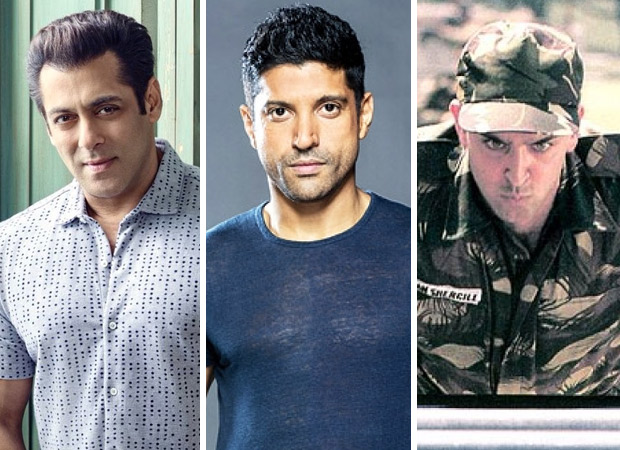 A couple of days back, Bollywood Hungama revealed that talented filmmaker-actor Farhan Akhtar has approached Salman Khan with a film. And if reports are to be believed, then Salman has liked the script. A source says, “Farhan and Ritesh Sidhwani met the superstar sometime back and narrated him a very interesting subject. The lead character is a Border Security Force (BSF) jawan and Farhan wants Salman to play this part. Salman Khan was quite impressed by the script as it has patriotism, thrill and entertainment in adequate doses.”

Sharing additional details about this film, the source says, “The movie is untitled yet. It is in the zone of Farhan’s second directorial film, Lakshya.” The 2004 flick starred Hrithik Roshan and was a coming-of-age story of an aimless youth who joins the army and matures into a battlefield hero. Though it was not a box office success, it was critically acclaimed and till date, is considered to be one of the finest performances of Hrithik Roshan.

However, the actor is in two minds. The source explains, “Though Salman Khan has loved the script, he is a bit apprehensive as it is not a typical entertainer. And anyway, he’s not in a hurry to sign his next. So he will take his time before deciding whether he wants to ahead with this film.” The source, before signing off, also states, “It is not clear if Farhan wants to direct this film or will be merely producing.”

Also Read: Farhan Akhtar reveals the first look of Toofan and it looks fierce and intense!