Kalank has become one of the most talked about films, courtesy it's ensemble cast. After the film went on floor with Varun Dhawan and Alia Bhatt, other stars like Madhuri Dixit soon joined the schedule. Now the last one to join the said schedule of the period drama is Sanjay Dutt. If media reports are to be believed, Sanjay Dutt will be shooting with Sonakshi Sinha and Aditya Roy Kapur. 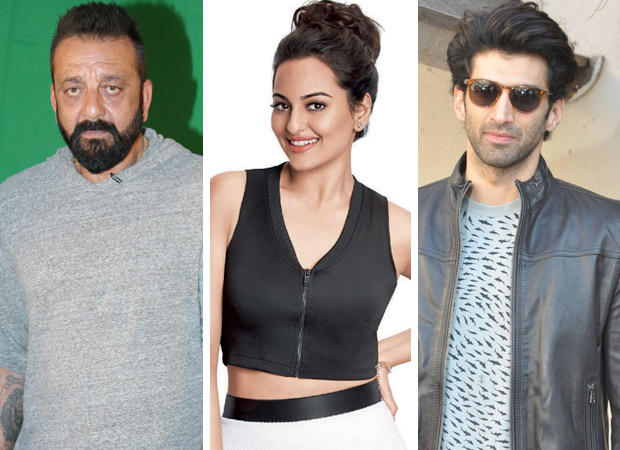 It seems that whilst Sanjay Dutt is completing the schedule with them, Madhuri Dixit had earlier completed a schedule with the other couple in the film, Varun Dhawan and Alia Bhatt. However, it is yet to be seen as to when will the Khalnayak couple Sanjay and Madhuri will share screen space. It is one of the most awaited moments since the two are sharing screen space after 25 years.

On the other hand, it seems that the rest of the cast of Kalank is busy with other commitments. Varun Dhawan, who recently shot with Aditya Roy Kapur and Kriti Sanon for a song in Kalank, is busy completing his other film with Anushka Sharma. We are talking about Sui Dhaaga which is slated for release this year.

As for Alia Bhatt, she too is busy with the shoot of her much talked about superhero film Brahmastra. She was recently spotted on the sets of the film with co-stars Ranbir Kapoor and Amitabh Bachchan. Considering the hectic schedule of all the cast members, sources have been stated in reports that the makers are keen on wrapping up the schedule as soon as possible.

Also, Sonakshi Sinha too will be jetting off for her Dabangg Tour soon. It seems that the actress will soon wrap up Kalank schedule for the tour as she will be performing across US and Canada. Accompanying her would also be her Dabangg co-star Salman Khan and other actresses.

On the other hand, Sanjay Dutt too is juggling between schedules. Readers may be aware that the actor has kicked off another film, with popular co-actor Manisha Koirala, Ali Fazal and Amyra Dastur. Titled Prasthaanam, the film is a remake of the Telugu blockbuster by the same name.

Speaking about Kalank, it is a period drama directed by Abhishek Varman.