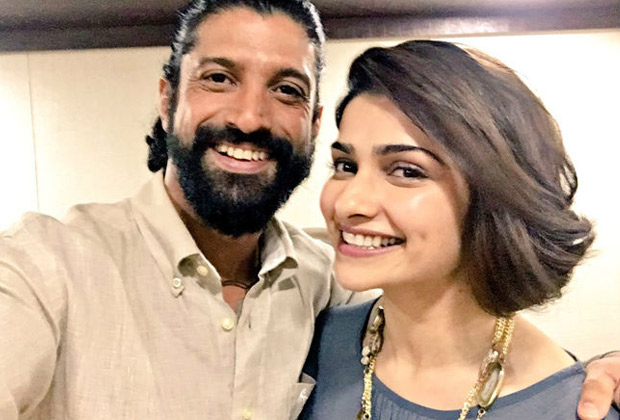 Considering that the musical Rock On 2 features several actors including new additions besides the older ones from the prequel, we hear that the actresses are feeling a tad bit ignored. While Shraddha Kapoor plays the leading lady in the sequel, Prachi Desai who plays the wife of Farhan Akhtar in the film is probably feeling left out and was spotted shooting a few extra scenes with her on screen hubby in Mumbai.

When the trailer of Rock On 2 hit the tube, there were speculations that Prachi was miffed with the very few almost negligible scenes in the film. Now it is being said that the makers wanted to avoid further trouble and decided to shoot some more portions along with the actress and her co-actor Farhan Akhtar. The said schedule was an outdoor one in Mumbai but it faced little trouble as it resulted in chaos. Whilst shooting a few portions of the film, it seems that crowd gathered around the sets and the bouncers ended up behaving a bit unruly in their attempt to take control of the situation. However, it is being said that Farhan Akhtar’s calm and good presence of mind helped in diffusing the situation and the shooting was completed without too many hassles.

Rock On 2 also stars Arjun Rampal, Purab Kohli among others and is directed by Shujaat Saudagar. It is slated to release on November 11.