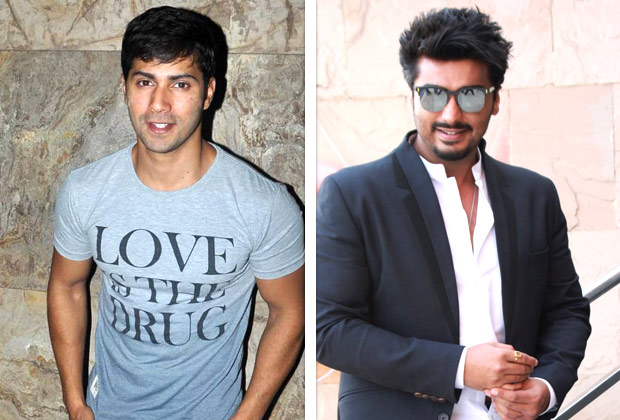 Readers may be aware that Varun Dhawan and Arjun Kapoor have been a part of the Bollywood industry ever since their childhood, courtesy, the filmy families they belong too. In fact, the two of them were launched by two of Bollywood’s most renowned productions houses, Dharma Productions and Yash Raj Films. However, they haven’t shared screen space yet in a Bollywood film. But now the duo has decided to appear on Koffee With Karan.

Very few may be aware that Varun Dhawan and Arjun Kapoor worked together on a short film White Mountain and were also studying together at Barry John’s Acting Studios. While their friendship goes back a long way since they are also childhood buddies, we will get to witness their real life camaraderie in this episode of the chat show.

Interestingly, Arjun Kapoor and Varun Dhawan were supposed to shoot for two different episodes but we hear that the actors themselves made the suggestion of coming together. Karan Johar immediately agreed as he thought that this would spice up the show as the two can definitely reveal a few unknown tid-bits about each other since they share years of friendship. In fact, Karan, who is looking forward to shoot for a chunk of episodes for the upcoming season of the show, will be kickstarting the same with this episode.

However, as far as the first episode is concerned, it has been learnt that it will have Karan Johar’s ‘student’ Alia Bhatt and bestie Shah Rukh Khan who will also be promoting Gauri Shinde’s next Dear Zindagi on the couch. The fifth season of Koffee With Karan will go on air on Star World by the end of 2016.