Saif Ali Khan left everyone stunned with his terrific villainous performance in Om Raut's directorial Tanhaji: The Unsung Warrior. Now, he's all set to step into the shoes of India's greatest villain ever in Adipurush - a magnum opus that marks the trio - Saif Ali Khan, Om Raut, and Bhushan Kumar’s second collaboration together after Tanhaji. Bollywood Hungama was first to report that Saif was roped in for the role. He has been signed on to play the prime antagonist in the period saga - who's menacing, lethal, and brutal, all at the same time. 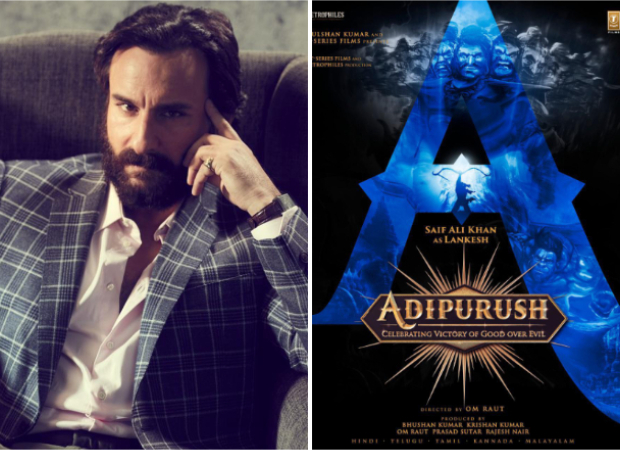 Talking of actors his age, Saif has cut out a completely different space for himself, thanks to his powerful choices in films. At a time when films high on concept and content are setting new standards, the Nawab has been willing to experiment and how. Plus, his acting prowess as a performer and his towering on-screen presence make him a perfect match for all kinds of roles.

Previously too, Saif has won a lot of accolades while playing the antagonist in several films - whether it's as Langda Tyagi in Omkara or as Udaybhan Rathod in the recently released Tanhaji. In Adipurush, which is an on-screen adaptation of the Indian epic, that revolves around the triumph of good over evil, Saif will be stepping into the role of a larger than life villain.

Prabhas says, "I am super excited to work with Saif Ali Khan and I am eager to share screen space with a great actor."

Saif Ali Khan is excited about the project and shares, "I’m thrilled to be working with Omi dada again! He has a grand vision and the technical knowledge to really pull it off. He has taken me beyond the cutting edge of our cinema in the way he shot Tanhaji and this time he is taking us all further! It’s a phenomenal project and I’m super thrilled to be a part of it! I look forward to clashing swords with the mighty Prabhas and to play a role that is electrifying and demonic!"

Filmmaker Om Raut adds, "To play the strongest villain from our epic we needed a brilliant actor. Who better than Saif Ali Khan, one of the greatest actor of our lifetime, to essay this powerful role. Personally, I enjoy every day at work with him. I am looking forward to this exciting journey with him all over again"

Producer Bhushan Kumar tells us, "Saif blew us all over with his role as Udaybhan in Tanhaji, he takes it a notch higher with his role in Adipurush. He is the perfect choice in this battle between good and evil with Prabhas."

Adipurush will be shot bilingual in Hindi and Telugu. The 3D extravaganza will have a humongous release with the film dubbed in Tamil, Malayalam, Kannada, and several other foreign languages.

The film, produced by Bhushan Kumar, Krishan Kumar, Om Raut, Prasad Sutar & Rajesh Nair, is currently in the pre-production stage and is expected to go on floors in 2021 and hit the marquee with a massive release in 2022.