The first look of Dolly Kitty Aur Woh Chamakte Sitare produced by Ekta Kapoor and directed by Alankrita Shrivastava had created quite a stir for its REBELutionary depiction of women. Interestingly, the highly anticipated film marks the second collaboration of two creative powerhouses, Ekta Kapoor and Alankrita Shrivastava, one of India’s leading female writer-director. The last time that the creative duo joined forces for Lipstick Under My Burkha, Bollywood experienced a mighty feminist wave and female perspectives that have often been under-represented came to the fore. Now that the two cine forces have pooled in their efforts for Dolly Kitty Aur Woh Chamakte Sitare, appreciation has come earlier than expected, in the form of selection at the prestigious Busan International Film Festival. Alankrita Shrivastava's upcoming directorial will be premiered at the festival on October 4, 2019. 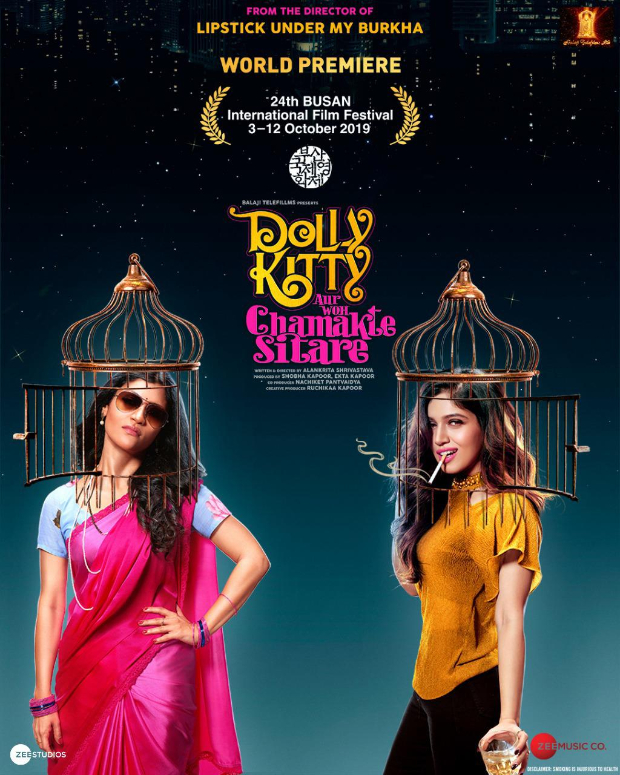 From the first look of it, Dolly Kitty Aur Woh Chamakte Sitare is a coming of age story of two rebellious and transgressive women through whom we explore female desire, the claiming of independence and the moral ambiguity of women. Helmed by Alankrita, who has a penchant for strong women-centric storylines and nuanced characters, the upcoming film stars two talented performers of Indian cinema, Konkana Sensharma and Bhumi Pednekar.

With the film making it to the Asia’s top film fest, the REBELution has begun on a high note already. On DKCS being selected at BIFF, director Alankrita exclaims, “As a filmmaker, the World Premiere is the most glorious moment of making a film and yet it is the moment wrought with the greatest anxiety. It's like giving birth to a child. And finally, let it out in the world. It will have a life and a destiny of its own. But it's the most beautiful feeling in the world to have your film screened for the first time. It's a memory of a lifetime. And having people from different countries and cultures watch the film in its first screening is truly special. I’m both humbled and excited that we’ve been picked by a prestigious festival like Busan, for the World Premiere of Dolly Kitty.”

Two years ago, Ekta Kapoor and Alankrita Shrivastava united for Lipstick Under My Burkha that swept the cinema scene with the sheer impact of its story and won accolades and box office success. The film went on to be screened at close to a hundred film festivals across the world and won 18 international awards, apart from the multiple awards won back home in India. Given the early signs of success that Dolly Kitty Aur Woh Chamakte Sitare shows, the film may well be on its way to repeating the history that Lipstick Under My Burkha created.