Director Alankrita Srivastava didn’t create waves with her directorial debut TURNING 30 [2011]. But her second film LIPSTICK UNDER MY BURKHA [2017] got worldwide recognition and also succeeded well at the Indian box office. That an attempt was made by the Censors to make reckless cuts in this ‘lady oriented’ film also caught people’s attention. And now the talented writer-director is back with DOLLY KITTY AUR WOH CHAMAKTE SITARE. It has a stellar star cast and the trailer indicates that it’s in the same zone as LIPSTICK UNDER MY BURKHA. So does DOLLY KITTY AUR WOH CHAMAKTE SITARE manage to entertain and engage? Or does it fail to entice? Let’s analyse.

DOLLY KITTY AUR WOH CHAMAKTE SITARE is the story of two cousin sisters trying to survive in an emerging city. Radha aka Dolly (Konkona Sensharma) is married to Amit (Aamir Bashir) and has two kids – Pappu (Kalp Singh) and Bharat (Hearty Singh). Dolly and Amit have invested in a flat in an under-construction building and can’t wait to shift into their new house. However, they are falling short of money and Dolly manages to arrange it from her office bank account through unscrupulous means. Her cousin sister, Kaajal (Bhumi Pednekar) moves in with them after she runs away from her family home in Darbhanga to avoid marriage. After being unsuccessful in finding a decent job, Dolly has no choice but to get employment in a Friendship club’s call centre. Here, she is rechristened as Kitty. She also moves out of Dolly’s house after Amit touches her inappropriately. In the PG, she befriends Shazia (Kubbra Sait) and begins to hang out with her and her boyfriend, DJ Teja (Karan Kundrra). At her workplace, she comes across Pradeep (Vikrant Massey) and she falls for him. Dolly meanwhile is unsatisfied with her sex life and she gets attracted to Osman Ansari (Amol Parashar), a young delivery boy. What happens next forms the rest of the film.

Alankrita Srivastava's story is decent. The attempt to make a comment on patriarchy and the ills existing in our society is praiseworthy. But Alankrita Srivastava's screenplay doesn’t do justice to the plot. There’s no proper flow to the writing and things happen in the film at random. Also, there are far too many subplots and not at all of them impress. Also, a few plot points don’t have a logical conclusion, especially the one about Dolly’s dream flat. Alankrita Srivastava's dialogues are sharp and to the point.

Alankrita Srivastava's direction is average. She was in a far better form in LIPSTICK UNDER MY BURKHA, possibly also because she was equipped with a far better script. In DOLLY KITTY AUR WOH CHAMAKTE SITARE, the script is not watertight, with only a few scenes really making the impact. Moreover, the biggest problem with the film is that Alankrita tries too hard to make the film as scandalous as possible. Almost everyone in the film is having a wild life – Dolly is fantasizing about a young boy and stealing money from office for her dream flat, her mother (Neelima Azeem) had left her husband to be with her lover, Kitty is selling romance for a living, Shazia is having short-term relationships while Dolly’s work colleague Juhi (Pavleen Gujral) doubles up as an escort. Moreover, Dolly’s son Pappu is a cross dresser. Amit and Pradeep, meanwhile, also have their share of dark secrets. The attempt here is to not judge or be regressive. But when almost all the characters in the film are having a scandalous double life, it becomes too much to digest. And not to forget, there’s also a political angle and that further makes things unconvincing. 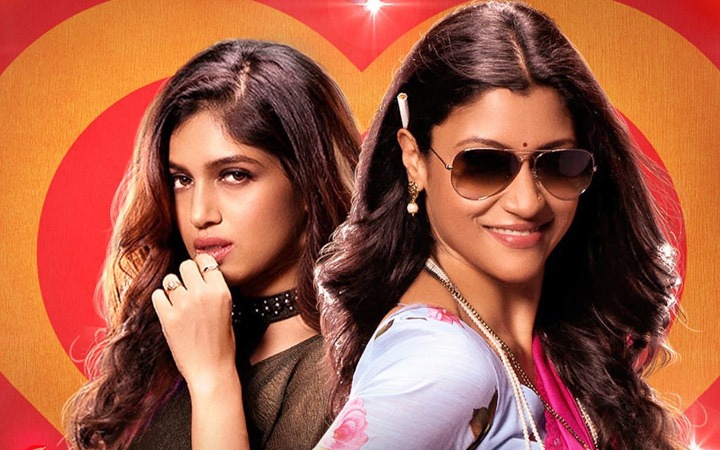 DOLLY KITTY AUR WOH CHAMAKTE SITARE begins on an interesting note and in no time, we get acquainted with the characters of Dolly and Kitty and also their relationship with each other. The first half is quite scattered and one won’t complain as one assumes that the director is trying to explain the setting and building up. But the same happens in the second half as well. On the positive side, a few scenes are well executed like Kitty’s first day at the call center, Dolly’s confrontation with her mother, the drama at the police station and Dolly and Kitty pouring their heart out on the rooftop. One expects the climax to be smashing but the way the events unfold are difficult to digest. To see all the main characters of the film, some of them from different cities or parts of the town, assembling at the same place is laughable. If this was a Priyadarshan film, it would have made still sense. But in a realistic film like this, it’s too much. The film’s final scene is sweet but not enough to enhance the impact.

The performances however save the day to an extent. Konkona Sensharma as always does very well and gets into the skin of her character. Bhumi Pednekar too puts her best foot forward and leaves a huge mark. Aamir Bashir is dependable. Amol Parashar is endearing while Vikrant Massey is first-rate in a supporting role. Kubbra Sait is quite good and it’s high time she is given lead roles in films. Karan Kundrra is decent in a small role. Kalp Shah has a challenging role but pulls it off nicely. Hearty Singh gets no scope. Neelima Azeem is excellent though she appears in just one scene. Pavleen Gujral, Prabhat Raghunandan (Billa), Ghanshyam Pandey (Shahnawaz Pradhan), Nutan Surya (Nancy; old-aged employee in the call center) and Brij Bhushan Shukla (property broker) are okay.

The songs are forgettable. 'Khwabida' gets registered a bit while 'Neet Ve', 'Bimari' and 'Rap Battle' fail to impress. Mangesh Dhakde's background score is subtle and effective. John Jacob Payyapalli's cinematography is neat and well done. Tiya Tejpal's production design is realistic and in sync with the film’s setting. Same goes for Rohit Chaturvedi's costumes. Charu Shree Roy's editing is passable but too quick at places.

On the whole, DOLLY KITTY AUR WOH CHAMAKTE SITARE has an important underlying message but the attempt to forcefully scandalize and politicize the narrative takes away the impact. This very reason, however, might also make the film a talking point.

How much would have Sadak 2, Akshay Kumar's Laxmii, Khaali Peeli and Ludo earned at the box office? Trade gives its verdict

"I’m okay with any platform becoming the vehicle of my creative expression,"says Bhumi Pednekar whose Dolly Kitty Aur Woh Chamakte Sitare will release on Netflix