Well, audiences have time and again listened to Amitabh Bachchan sing and they have loved it each time. Whether it was Baghban or Shamitabh, the megastar has also received appreciation for the same and 102 Not Out too will be no exception. For all those who are waiting to hear Amitabh’s voice, good news is that he will be singing more than one song for this film too. 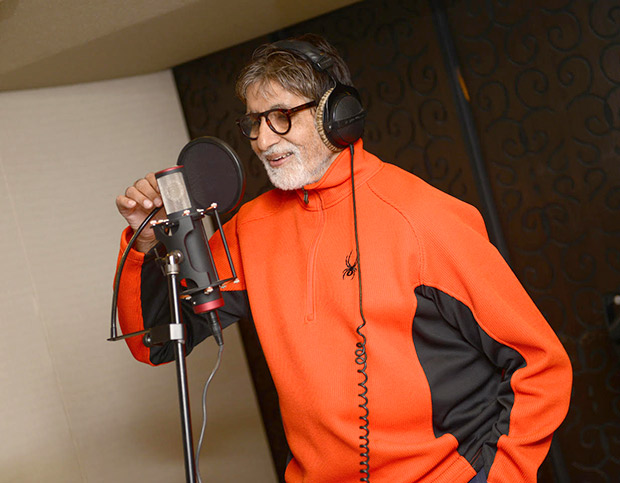 In his upcoming film 102 Not Out, we hear that Amitabh Bachchan has taken a keen interest in its music. He has already shared with us his experience of creating the track ‘Badumbaaa’, which was entirely his idea. In fact, the megastar has also sung the song along with his co-actor in the film, Rishi Kapoor.

And now, Amitabh Bachchan has now revealed that there is another track that he has sung, which is extremely special and close to his heart. It is a new rendition of the timeless classic, ‘Waqt Ne Kiya Kya Haseen Sitam’, from the movie Kaagaz Ke Phool (1959). However, there is a mention of this song in the film.

The film’s original music was composed by SD Burman and this song was beautifully rendered by Geeta Dutt. Amitabh Bachchan, who plays a 102-year-old man in the film, recorded the track in his characteristic deep and booming voice. The song was arranged by Rohan Utpat and Vinayak K Salvi.

Interestingly, ‘Mere Paas Aao’ from Mr Natwarlal (1979) was the first time that Amitabh Bachchan used his rich baritone to add depth and drama to a Hindi film song. Since then, his soulful voice has graced many memorable songs like ‘Neela Aasman So Gaya’ and ‘Rang Barse’ from Silsila (1981), ‘Mere Angne Mein’ from Laawaris (1981) and ‘Main Yahan Tu Wahan’ from Baghban (2003) to tracks like ‘Ekla Cholo Re’ from Kahaani (2012) and ‘Piddly Si Baatein’ from Shamitabh (2015) in recent years.

Directed by Umesh Shukla, 102 Not Out is slated to release this week, on May 4.

Also Read: When Amitabh Bachchan and Rishi Kapoor shot without footwear for 102 Not Out