Akshay Kumar is on FIRE, quite literally. After performing a dangerous stunt on stage while announcing his new Amazon show, he is now teaming up with Rohit Shetty to perform a series of even more dangerous stunts on the sets of Khatron Ke Khiladi! Oh yes! That is happening too. AK took to Twitter to announce the same with yet another fiery picture and we are SHOOK. He captioned it as, “It's a flaming week for #Kesari Warming up with #RohitShetty for Khatron Ke Khiladi. Watch this space!! P.S. Don’t tell my Wife”. Seems like Akshay Kumar is promoting Karan Johar’s Kesari on the sets of Khatron and we are very excited to see how that unfolds. While posting the picture, he also took a jibe at Twinkle Khanna because well, the Mrs was not very happy with the fact that AK set himself on fire. She had tweeted, “Crap! This is how I find out that you decided to set yourself on fire! Come home and I am going to kill you in case you do survive this! #GodHelpMe.” 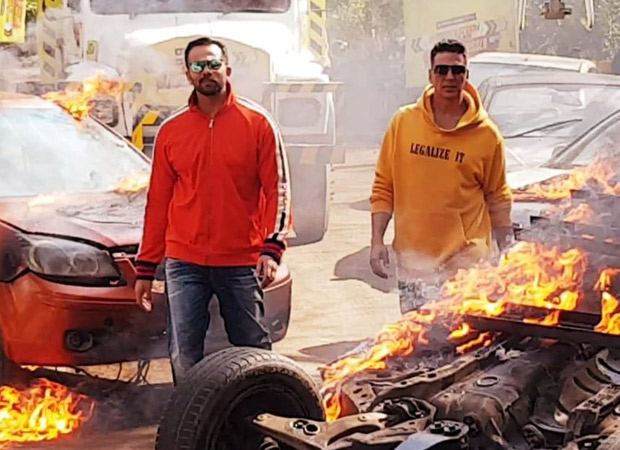 Akshay will be seen in Kesari next. He is currently also shooting with Kareena Kapoor Khan for Good News which again is a Dharma Productions’ venture. Akshay and Rohit are also working on Sooryavanshi and reports suggest that they have already started shooting. The teaser is already shot in Goa, it is claimed.

Log on to Bollywood Hungama for more news updates about Akshay and his upcoming ventures.

Also Read: Akshay Kumar and Sobhita Dhulipala to star in a horror comedy