Our history is replete with innumerable stories of heroism, which will shock one and all. More shocking is the fact that so many such brave tales are not even known popularly. The Battle of Saragarhi is one such story. 10,000 soldiers fighting against a troop of just 21 men - on the story level itself, it’s quite intriguing and even exciting. A couple of filmmakers did show interest in this project but for various reasons, these ventures couldn’t materialize. Finally, Akshay Kumar along with Dharma Productions and director Anurag Singh made it happen with KESARI. So does KESARI provide ample entertainment and patriotism doses? Or does it fail to stir up the emotions? Let’s analyse. 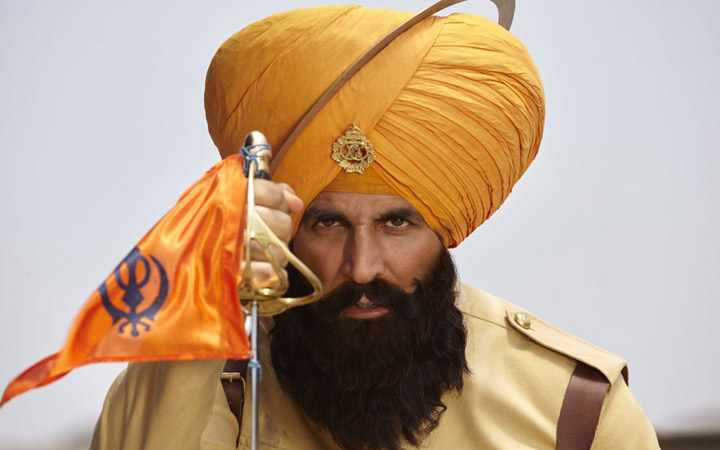 KESARI is the story of valour and bravery. The year is 1897. Hawaldar Ishar Singh (Akshay Kumar) is posted somewhere in the present-day Khyber Pakhtunkhwa in the Sikh regiment. The regiment witnesses a woman about to get killed by a group of Afghan tribesman for not adhering to her marriage. Despite the superior British officer telling him to not get involved, Ishar attacks the Afghans and saves the lady. The British officer is furious and as punishment, Ishar is transferred to Saragarhi Fort, considered as a place where ‘nothing happens’. Ishar Singh reaches there and realizes the 20 Sikh soldiers posted in the fort as part of 36th regiment are making merry since they are aware there’s no way an emergency or war like situation will ever arise. Ishar attempts to punish them but realizes that they are tough and have a brotherly feeling towards each other. Meanwhile, the various Afghan tribe chiefs unite and decide to attack the Saragarhi Fort and also Fort Gulistan and Fort Lockhart and thus defeat the British. The Afghans are aware that there are a handful of Sikh soldiers in Saragarhi and hence, they would be easily defeated. They begin their march. Ishar Singh and the others in the fort get shocked as around 10,000 tribesman stand outside the gate of the fort and all set to attack. Ishar gets an order from the British to stay put at the fort. They are unable to provide help as the Afghans have cut off all routes to Saragarhi. Ishar asks his regiment that fighting so many people will be fatal and that they can all run away. The soldiers however refuse to escape and chose to fight and die. What happens next forms the rest of the film.

Girish Kohli and Anurag Singh's story is interesting and inspirational. Although there has been a television series on this battle, still this episode hasn’t got its due. Hence, KESARI is sure to educate viewers on this landmark incident of Indian history. Girish Kohli and Anurag Singh's screenplay is effective for most parts. The first half has some light as well as tense moments. But it is also weak at some places and could have been better written. But the second half is where the writers do a fabulous job. They have written the sequences very simply and hence, viewers will be able to comprehend what’s going on. Also, drama is very well infused in war sequences to keep audiences glued to their seats. Girish Kohli and Anurag Singh's dialogues are sharp and also funny at places. Moreover, they are clapworthy and relevant in today’s times.

Anurag Singh's direction is neat and uncomplicated. The sequences flow very well although in the first half, he could have done a better job. He manages to stir anger towards Afghans among the viewers. Also, the 21 Sikh soldiers are actually fighting on behalf of the British and this angle could have affected the impact. But the director takes care of this aspect nicely. Throughout the second half, one just roots for the 36th regiment and want them to emerge victorious. On the flipside, one wishes the execution was little better at certain points.

KESARI has a fine first half and it’s mainly utilized for the build-up and to introduce the characters. There are places where one does feel a bit disappointed as the goings-on are not that great. Also, the romantic track is damp squib. But the makers compensate with the introduction sequence, the scene of the hen and with the scene of the Sikhs rebuilding the mosque in the village. The intermission arrives at a great point and it sets the tone for the second half. Post-interval, the film goes on a high with several scenes turning out to be clap and whistle worthy. Films usually suffer from the curse of the second half but KESARI is an exception. The scene where Ishar wears the kesari-coloured turban and arrives in front of the regiment is sure to create a riot! The battle scenes are a treat to watch as the soldiers use clever tactics to eliminate the Afghans. At the same time, the manner in which the soldiers begin to die one by one also affect you emotionally. The climax is sure to give a lump in the throats of the viewers but the makers add a nice heroic angle here that’ll surely lift the nationalistic spirits among viewers.

Talking of performances, Akshay Kumar delivers an excellent performance. He looks totally in character. Check out his restrained smile when one Sikh soldiers urinates to chide the Afghans! Or of course in the climax when he’s down but not out. Yet another spectacular performance from this talented performer! Parineeti Chopra (Jiwani Kaur), credited as special appearance, doesn’t contribute much to the film. Her scenes, where she features in Ishar’s thoughts, don’t add much. Actress Toranj Kayvon (Afghani lady) makes much more impact in comparison. Mir Sarwar (Khan Masud) leaves the maximum mark out of the Afghani tribesmen. Bhawani Muzamil (mysterious sniper) gets to play a badass character and he’s quite fun. Rakesh Chaturvedi (Mullah) plays the evil character well. Ashwath Bhatt (Gul Badshah Khan) is decent. From the Sikh soldiers, Surmeet Singh Basra as Gurmukh Singh is the best and has a very crucial part to essay. Vansh Bharadwaj (Lance Naik Chanda Singh) also does a fine job.

Music might not have a longer shelf life but works well in the film. The very entertaining 'Sanu Kehndi' is sadly missing from the film. Same goes for 'Ajj Singh Garjega'. 'Deh Shiva' turns out to be the best and used very well. 'Teri Mitti' is quite moving. Raju Singh’s background score gives the film a heroic feel.

Anshul Chobey's cinematography is spectacular. The long shots especially are impressive. What also aids the lensman is that the film is shot in some breathtaking locations. Sheetal Sharma's costumes are authentic. Subrata Chakraborty and Amit Ray's production design is a bit unauthentic in the fort scene, especially the exterior shots as it seems fake. But a lot of effort has been done to recreate the bygone era and it proves to be successful on other fronts. Parvez Shaikh and Lawrence Woodward's action is hardcore as per the requirement and is choreographed superbly. Fluiidmask Studios's VFX is praiseworthy. Manish More's editing is razor sharp overall and could have been shorter in the first half.

On the whole, KESARI is a brave and inspirational tale of courage and patriotism with the dramatic battle sequence as its USP. At the box office, it will be loved by the classes as well as the masses while the four-day weekend will prove beneficial for the makers. Recommended!