In the run-up to the much-awaited world television premiere of Radhe: Your Most Wanted Bhai this Independence Day, Zee TV provided each Salman Khan fan across the country a once-in-a-lifetime opportunity to express their undying love for their idol. With the idea of creating a first-of-its-kind fan-sourced photo mosaic depicting Salman Khan as Radhe announced on Zee TV's social media and through the channel's PR machinery, Zee TV saw a deluge of fans sending in their selfies to complete the gigantic fan installation. Their enthusiastic participation not only depicted the sheer love for their one and only Bhai but also enabled the channel to create a rather interesting World Record. With thousands of colour-coded images of 'Salman Khan Ke Sabse Bade Fans', a mammoth 32 ft x 20 ft fan-sourced mosaic of Radhe was created, making a spectacular entry into the International Book of Records as the ‘Tallest Fan Photo Installation’. The team at Zee TV is all set for a felicitation as the process of world record certification is underway. 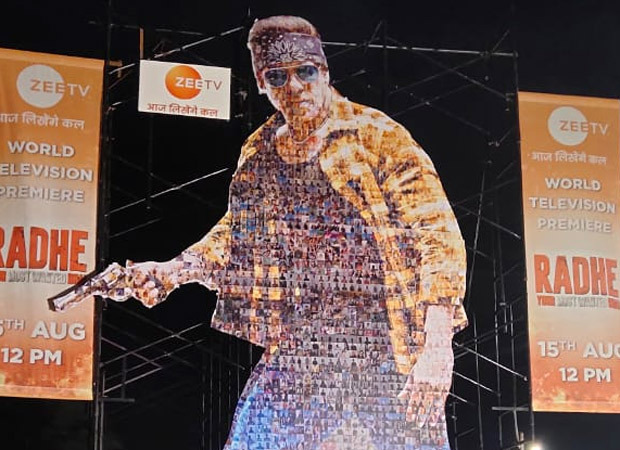 The three-day activity commenced on 10th August at the Carter Blue Promenade in Bandra, Mumbai, where the life-size cut-out of Salman Khan in his Radhe avatar was installed and was opened for the selfies of the superstar’s fans across India. With fans posting their selfies using #BhaiKoSalaam and tagging the channel on their respective social media posts, the activity witnessed an overwhelming response within a matter of hours from its announcement.

With thousands of images being added to the installation on a daily basis, it took only 3 days to populate the vibrant mosaic. In fact, a lot of Salman’s Mumbai-based followers also visited the venue to click a selfie and pasted their own image on the mosaic. With the last set of photos making their way onto the mosaic last night, Mumbaikars got a bird’s eye view of the mammoth Radhe artwork this morning.

Speaking about this unique installation, Aparna Bhosle, Business Head of Zee TV said, "For millions of fans across the nation, Salman Khan has been this larger-than-life hero they worship, a symbol of incomparable charisma and effortless swagger. It was with the intent of enabling every Salman fan to express their love for him in an extremely personal way that we invited them to contribute their selfies, which in turn assembled and curated into to an almost God-like avatar - a gigantic mosaic of their idol at the busy Carter road promenade in Mumbai and finally created a World Record for the Tallest Fan Photo Installation of Radhe. We hope this celebration of Salman's fandom mirrors the euphoria surrounding the world television premiere of his film Radhe we're bringing our viewers on Independence Day."

While the fan mosaic is up and available for everyone to visit at the Carter Blue Promenade in Bandra (Mumbai), the movie - Radhe: Your Most Wanted Bhai, will premiere on 15th August on Zee TV.

Being a perfect mix of entertainment, action, and thrill, the world television premiere of Radhe: Your Most Wanted Bhai will make for the ideal family viewing experience on Independence Day at 12 Noon, only on Zee TV.