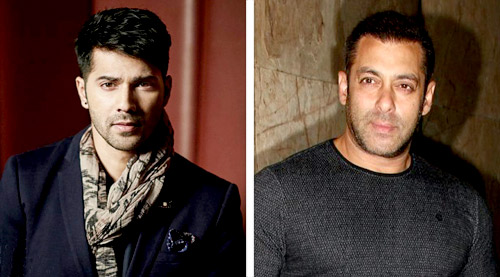 Though for years there have been speculations about an impending Judwaa sequel, it was only recently announced that Gen Y star Varun Dhawan will be replacing Salman Khan in the second instalment. While the actor definitely finds it as a huge responsibility to fill in the shoes of this superstar, Varun Dhawan recently revealed that he will be lending the first draft of the script for Judwaa 2 to Salman Khan for a read.

Varun Dhawan recently stated that once the script is locked, it will first be given to Salman for his inputs. While the actor does maintain that his experience of acting in the first instalment of the film will be important, he also added that he is doing this out of respect. Varun's father David Dhawan shares a great rapport with Salman Khan and the Gen Y actor too has previously stressed on how much he respects the superstar for his vast experience in the industry.

Rumours of several actresses being approached to play leading ladies to the dual role of Varun Dhawan in the film have been doing the rounds. The latest we hear is that Parineeti Chopra is being considered for one of the them after their sizzling chemistry in the song 'Jaaneman Aah' from the film Dishoom.