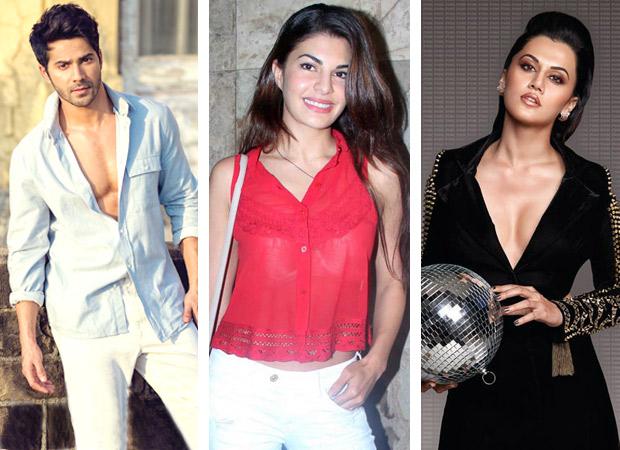 After finishing the London schedule of Judwaa 2 in May, Varun Dhawan has kick started the last schedule of his film in Mumbai. The Judwaa 2 cast and crew were spotted shooting near the Bandra – Worli sea link in Mumbai on Monday morning.

While the cast is on its last schedule, they are all set to recreate the hit track 'Tan Tana Tan' next week. The trio kicked off the rehearsals on June 11 under the guidance of choreographer Ganesh Acharya at a Mumbai studio. According to a source, they have been rehearsing for the song for three to four hours daily to keep the essence of the original song but adding a new flavour to it with new hook steps. A giant set has been built in Mumbai for the song shoot. After this song, the cast and crew will head to Portugal to shoot a romantic number in July. It will be a five-day shoot.

Speaking of the song, Jacqueline recently said that she is very excited to work with Ganesh Acharya again after 'Taang Uthake' in Housefull 3. She also said that it has been a hectic training as Varun Dhawan is one of the toughest dancers to keep up with. She said that he brings an insane amount of energy to the set which is also motivating and encouraging.

Besides this song, another chartbuster 'Oonchi Hai Building' from the Salman Khan-starrer has already been recreated by the three actors. The song was shot in London.

Directed by David Dhawan, Judwaa 2 stars Varun Dhawan, Jacqueline Fernandez and Taapsee Pannu. It will also have a special appearance by original Judwaa, Salman Khan. It is scheduled to release on September 29, 2017.