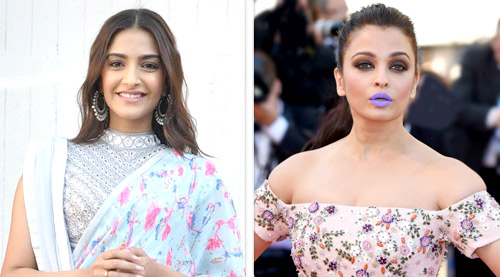 Aishwarya Rai Bachchan's 15th year at Cannes Film festival turned out to be quite a show with a purple lipstick becoming the talk of the town. The former beauty queen, who experimented with this shade of lip colour on the red carpet for the premiere of her film Sarbjit, became a victim of twitter trolls and viral jokes. Her co-actor and co-ambassador of L'Oreal Paris, Sonam Kapoor however came sout in support of Aishwarya Rai Bachchan and voiced out her opinion on the fashion faux pas.

Sonam Kapoor, who is known to speak her mind, was of the opinion that fashion is a subject that demands discussion. She added that may be Aishwarya wanted to be a part of this discussion and that she has achieved what she wanted to by grabbing eyeballs at the red carpet, that too, with just a lip-colour. Asserting that it was a great thing, Sonam Kapoor also joked about how Aishwarya walked the red carpet for Amul (who used her caricature as one of the characters in its topical poster) instead of sashaying down the red carpet for L'Oreal.

Revealing about her own experiments with fashion, not only did Sonam Kapoor agree about trying on a similar shade of lip colour but she also stated that she has even sported a shade of black for a photoshoot.