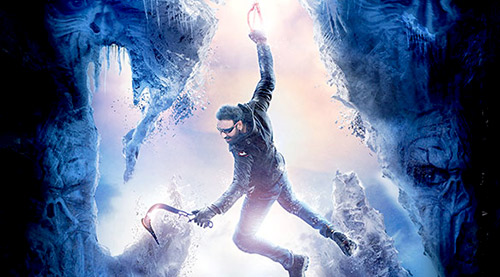 Ajay Devgn has been busy shooting for his magnum opus Shivaay in freezing temperatures, but recently the actor revealed a few teaser posters of the film before finally revealing the final poster on twitter saying, "Here is the latest poster of Shivaay, tell me what you think about this??". However, now we hear that a complaint has been filed against the actor in connection with the said poster.

In fact the complaint that has been filed in Delhi's Tilak Nagar police station by advocate Manmohan Singh states that the poster of the movie which shows Ajay Devgn climbing Lord Shiva's figure with shoes on and using an ice axe on the head of Lord Shiva, has hurts the sentiments of the people having faith in Lord Shiva and Hinduism.

As for the film Shivaay, that marks the Bollywood debut of Dilip Kumar's grandniece Sayyeshaa Saigal is said to be a high-octane action-drama that also features Abigail Eames, Erika Kaar, Ali Kazmi and Jabbz Farooqi.

Directed by Ajay Devgn the film is slated to hit the theatres on October 28, 2016.