Satyameva Jayate was released on Independence Day 2018 and took an earth-shattering opening, surprising the trade and industry alike. The massy treatment, John Abraham’s presence, music and well-cut trailer contributed to this development. Another factor that helped was Nora Fatehi’s song ‘Dilbar’. It topped the chartbusters pre-release and played a major role in attracting audiences to the theatres. The super-success of the track made Nora Fatehi a household name. Yesterday, the trailer of Satyameva Jayate 2 was unveiled and it showed glimpses of Nora Fatehi’s item song in the film and it made it evident that it’s yet another sizzling track from the actress. 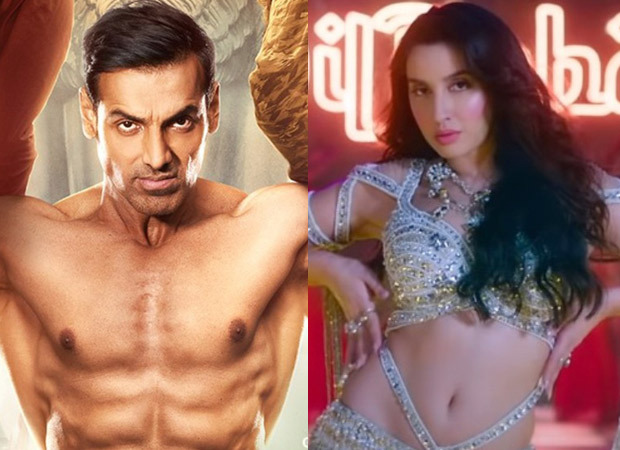 A source told us, “The song will either be titled ‘Dilruba’ or ‘Kusu Kusu’. Nora has done belly dancing and those who have seen swear that she is at her hottest best in the song. Interestingly, unlike ‘Dilbar’ or her other songs in Batla House (2019) and Marjaavaan (2019), this song in Satyameva Jayate 2 is an original track. But like ‘Dilbar’, it has the Middle Eastern vibe.”

The source also said that since it’s a song of the Satyameva Jayate, the whole team has gone all out in ensuring that it turns out to be a memorable track. The source stated, “The careers of Nora Fatehi and director Milap Zaveri went on another level after the song ‘Dilbar’. Nora then appeared in Milap’s next Marjaavaan as well in a special song, and also in Batla House, which was produced and directed by Satyameva Jayate’s co-producer, Nikkhil Advani. Both share a great bond and when Satyameva Jayate 2 was conceived, the makers knew that they had to incorporate a Nora Fatehi track. Yeh franchise Nora ke bina adhoora hai. Nora Fatehi was also more than happy to be a part of this song. We are now waiting for this song to be out. Dekhna, yeh gaana aag laga dega!”

Satyameva Jayate 2 features John Abraham in a triple role and in four different avatars. Also starring in the film are Harsh Chhaya, Gautami Kapoor and Anup Soni. It will be released in cinemas on November 25, 2021.

Also Read: Nora Fatehi and Sidharth Malhotra to feature in the Hindi version of ‘Manike Mage Hithe’ in Thank God