Ranveer Singh is blissfully living this amazing time in his career. The actor is not only gaining success in films, but he is also topping the charts when it comes to brand endorsements. In the latest TAM study, Ranveer Singh has topped the list of the most visible celebrity with an average visibility of 13 hrs/day on television through endorsements. This data is till November 2018.  He has beaten Team India's Captain Virat Kohli and megastar Amitabh Bachchan who have bagged second and third position respectively with 12hrs/day visibility. 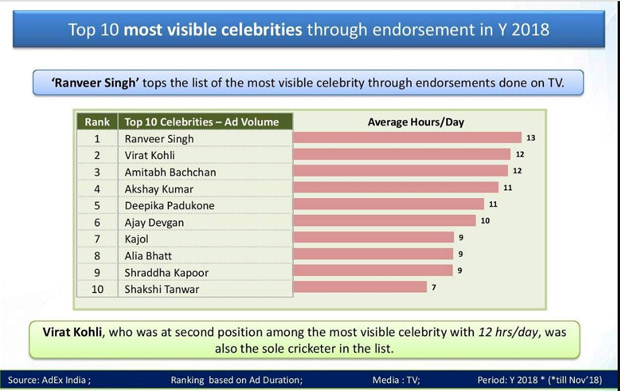 This is followed by Akshay Kumar in fourth position and Ranveer's superstar wife Deepika Padukone in the fifth position with 11hrs/day visibility. Ajay Devgn is in the sixth spot with 10hrs/day followed by his wife Kajol in the seventh position, Alia Bhatt in eight spot and Shraddha Kapoor bags the ninth place with 9hrs/day. The tenth position is bagged by Dangal actress Sakshi Tanwar with 7hrs/day.

On the work front, Ranveer Singh will be essaying the role of a street rapper in his upcoming film Gully Boy. Starring Alia Bhatt and Siddhanth Chaturvedi, the film is helmed by Zoya Akhtar and is slated to release on February 14, 2019.