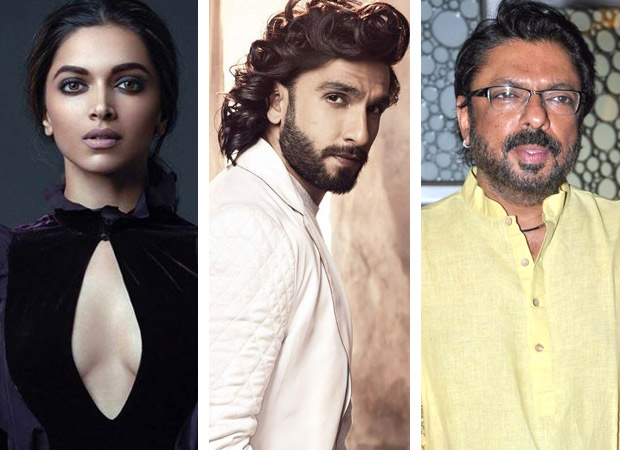 In Sanjay Leela Bhansali’s magnum historical Padmavati, Deepika Padukone plays Rani Padmavati, a woman adored by her husband Maharawal Ratan Singh (Shahid Kapoor) while Sultan Alauddin Khilji (Ranveer Singh) gets obsessed with her beauty. As a woman with two men fighting over her on screen, in real life too, Deepika Padukone is facing an opposite issue – there have been reports that her two heroes Shahid Kapoor and Ranveer Singh are upset because she attended the event alone without informing them. We tell you what really happened.

A trade source says, “At the Padmavati 3D trailer launch, Deepika Padukone was asked to go by Sanjay Leela Bhansali himself as her date was with him. She was finishing some patchwork but he asked her to attend the event and complete her shoot after that. The moment she got done she left for the Padmavati shoot. Nobody questions Bhansali and she has worked with him in three films and understands where he’s coming from. The filmmaker is very clear on what he wants and there’s apparently a marketing strategy that the three of them will be promoted at different dates. A promotional schedule has been chalked out and Shahid Kapoor and Ranveer Singh’s teams have been informed who will attend what and where; so what was the fuss about? Shahid was not upset at all. Stars who work with Sanjay Leela Bhansali know that he controls the publicity and the actors have no hand in it at all. Nor was Ranveer Singh upset as he and Deepika Padukone were seen flirting with each other on Instagram just yesterday after he put up a picture of his.”

The source adds, “It is a known fact that apart from the filmmaker himself, SLB Films is a strong production house in the industry and even the biggest of stars follow what they are told to do by them. Sanjay Leela Bhansali is a director that most stars want to work with and also respect him immensely. Bhansali decides who attends Padmavati events. It was he who decided that Deepika Padukone too should attend the 3D trailer launch event on the day she was shooting for Padmavati. The actress merely followed what she was asked to do by her director. All three actors are very professional and will always obey their director's requests whom they love and respect.”