Suvendu Raj Ghosh’s directorial venture Before You Die… is slated for release on the 4th of February 2022, which is also World Cancer Day. The film’s first song has just been released - ‘Hum Tere Ho Gaye’ sung by singer Jubin Nautiyal. The song is a romantic ballad shot in the picturesque location of Lamhatta, Darjeeling. A slow version of this song has been sung by Deepika Samanta as her debut into the music world. 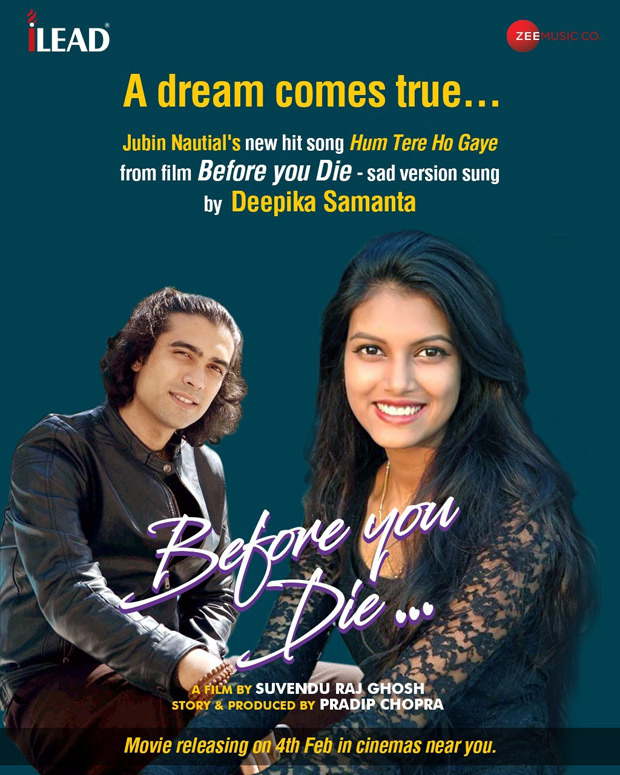 Deepika’s story of how she landed her first song in iLEAD’s first Hindi feature is a serendipitous and miraculous story. “There is nothing random, Nature/GOD/Destiny is always whispering to you, all you need is the power to understand that at the right time”, says iLEAD’s Chairman and the Writer-Producer of Before You Die… Pradip Chopra.

It so happened that Pradip Chopra was in Mumbai a few weeks back. He had just checked into his hotel and was waiting for his room to get ready. Post-production was in full-swing on his first feature film. As he waited in the hotel’s empty restaurant, a young girl walked into the room and sat down with her electric guitar, and began checking the sound system. She began tuning her guitar to a song ‘Yeh Raatein Yeh Mausam’, which just happens to be Pradip’s favorite song. He is also a singer and loves recreating melodies on his YouTube channel. Deepika then sang the famous alaap the song follows up with. He couldn’t stop himself and complimented her immediately. The two had a long conversation about their interests in music. Before she started with her live show they also sang together ‘Dil Ki Nazar Se’ and had a wonderful time.

Pradip decided to wait and watch her perform live at the hotel and was joined by Director Suvendu Raj Ghosh in the meantime. Pradip had heard Deepika’s story and the struggle she had faced since moving to Mumbai to pursue her dream of singing in the Film industry and instinctively felt that she would be perfect to sing the title track of his film Before You Die. They immediately had a conference call with the music director and decided to record Deepika singing a version of the title track ‘Hum Tere Ho Gaye’.

This is the heart-warming story of how Deepika Samanta, bagged her debut as a singer. A chance encounter, being in the right place at the right time, and of course, sheer talent, that led to this wonderful debut. It is also a testament to the fact that never give up on your dreams, and that the Universe always gives the deserving chances. Pradip, who believes in nurturing up and motivating new talents says, “I am glad to have found an amazing talent like Deepika. It’s not just me, but a few of my acquaintances and friends from the industry have also praised her and even asked me how I came across such a gifted singer”.
Tags : Before You Die, Deepika Samanta, Dil Ki Nazar Se, Hum Tere Ho Gaye, iLEAD, News, Pradip Chopra, Suvendu Raj Ghosh, Yeh Raatein Yeh Mausam