Amitabh Bachchan is all set to back on the Television with the tenth season of Kaun Banega Crorepati. The show, which began in 2000, is completing 18 years this year. With the new season beginning in September, the launch of the KBC 10 was really special in the presence of megastar. During the media interaction, Amitabh was asked about Salman Khan and his desire to host the show. 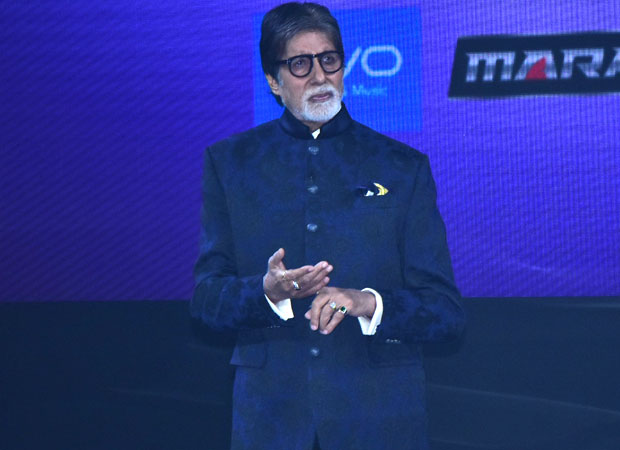 For the uninitiated, in a recent episode of Dus Ka Dum, Salman Khan had expressed his desire to host Kaun Banega Crorepati. When asked about it to the megastar, he simply said, "He is welcome to do it."

Talking about his youngest granddaughter Aaradhya Bachchan and whether she is aware of the show, he admitted that she likes to hear the theme music of it. "She knows that there is a show called 'KBC'. She loves the title music and can identify it. But I've not played this game with her. Though it's a good idea. She is very young. Also, she is quite busy with her various school activities. She does have quizzes in her school. I must also add that she is very knowledgeable and an inquisitive child," he added.

Speaking of his son Abhishek Bachchan and his second innings with Manmarziyaan, Amitabh Bachchan said that he is looking forward to watch the film. Abhishek is returning to movies after 2 years of sabbatical. Talking about the film, Big B said, "Don't know if it should be called a first inning or a second inning but he's working and I am looking forward to see his work."

Amitabh Bachchan has hosted several seasons of this popular game show. When asked why he loves coming back to the show, he said, "I love the fact that I get a chance to interact with common people. I get to connect with the contestants in person. I in fact, sometimes don't like when the shoot doesn't start on time. I also get anxious when a contestant is playing well and gets stuck at any particular question. I have to follow the rules of the game and can't help them but I really get excited when they win huge amount on the show. We like them to earn as much money as possible. It is a very rewarding experience.”

Sharing his experience about KBC, he further added, "When we work in films, there's teamwork. Someone pens down the story, the other person directs you, then there is a person who applies make-up on your face, but here there are no restrictions. I can do and say whatever I feel whether it is good or bad. Of Course there is a teleprompter that I follow for few things, but the rest of the thing is heartfelt which comes out naturally because of the contestants."

The show Kaun Banega Crorepati has been a remarkable journey of 18 years. When asked whether Indian TV is matching global standard, Amitabh Bachchan said, “I do feel that the Indian film industry is a valuable industry as is the Indian TV industry. But every time when we compare ourselves with the western country, we should consider the fact that they are at least 100 years ahead of us. Not maybe with their talent perhaps (as compared to our talent), but they got independence before us. I think in the past 70 years, the amount of success that we have achieved is (one of the) very few examples for the rest of the world."

The tenth season of Kaun Banega Crorepati will start from September 3 on Sony Entertainment Television.