The hype around Rohit Shetty directorial Simmba starring Ranveer Singh and Sara Ali Khan is only increasing day by day. The cast is currently in Hyderabad. While the film is in its final schedule, the lead pair of Ranveer and Sara recently shot a peppy dance number for Simmba on Monday with none other than Golmaal gang. 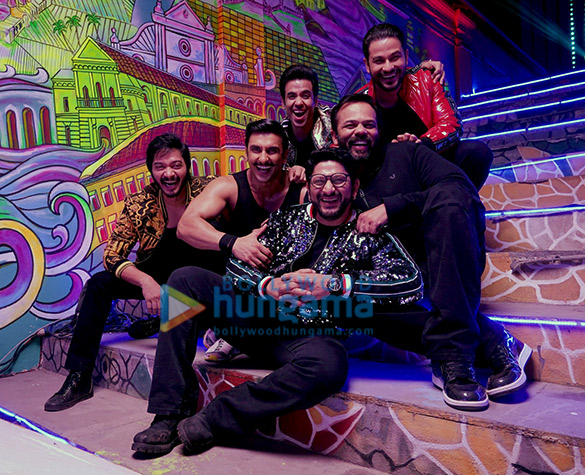 Tusshar Kapoor, Arshad Warsi, Shreyas Talpade and Kunal Kemmu reached Hyderabad to shoot a dance number and we have got a glimpse of it. Ranveer, on Wednesday, shared a video of all of them and his leading lady Sara doing the hook step of Golmaal. It was a perfect blend of Golmaal meets Simmba. He captioned the boomerang video, "Everything’s gone a bit #Golmaal !!!"

It was finally confirmed by Arshad Warsi that he was happy to oblige for a cameo when Rohit Shetty asked him. The film has recreated version of 'Aankh Maare’ which was originally picturized on Arshad himself in the 90s and it was one of the hit tracks.

"Once again it is absolutely clear to me why @deepikapadukone is in love with @RanveerOfficial it is so easy to fall in love with him... loved working with you buddy," Arshad wrote on Twitter after shooting with Ranveer.