A robbery that occurred at Indravati High School in Khatiguda area of Odisha’s Nabaranpur district last week has left the school officials and authorities perplexed. Reason? The said burglars apparently wrote a Bollywood film inspired message on the blackboard of a classroom. The message made a reference to the popular Yash Raj Films franchise Dhoom and it read, “Its me Dhoom 4. Coming Soon.” Needless to say, the news about this burglary spread like wild fire considering its uniqueness. 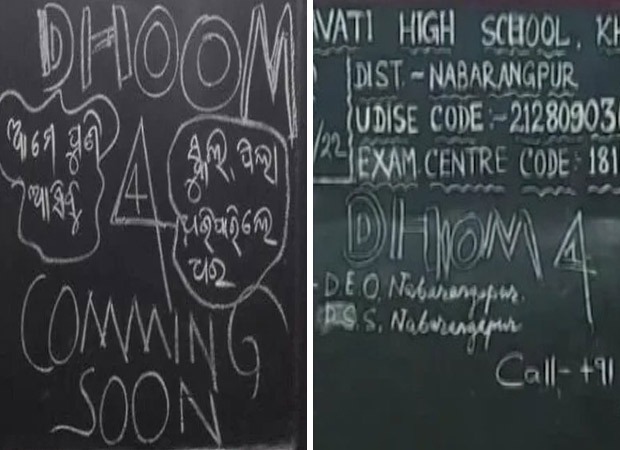 As per reports, a peon found the main gate broken on Saturday and alerted the school authorities regarding the missing items from the school premises. In a statement given by the school headmaster Sarbeswar Behera to News18, he was quoted saying, “We found that the computer and Xerox machine were missing from the office room. Two of our teachers had retired and we had organized a farewell for them. Some musical instrument used in the function were also stolen by the miscreants.”

Furthermore, the burglars reportedly also left a message for the police authorities challenging them to catch them if they can. Further adding to their filmy style, they left a series of phone numbers as hints or to mislead the officials. Upon investigation, it was found that one of the numbers belonged to one of the school teachers. While the police are continuing with the investigation procedure, no arrest has been made in the case by far.

Movie buffs would be aware that the Dhoom franchise showcases the epic cat-and-mouse chase game between a cop and robber. The franchise featured some of the biggest, high profile robberies with actors like John Abraham, Hrithik Roshan, and Aamir Khan playing the role of burglars. Looks like the film proved to be an inspiration to these Odisha burglars who want to add their names to the fourth film in the franchise.

Also Read: Akshay Kumar clears the air around speculations of him doing Dhoom 4