Let’s just put it there – Karan Johar is a formidable fashion force! In the now-fashion riddled Bollywood, Karan Johar’s game-changing and fabulous shenanigans with all things modish, quirky and incredible are intriguing to say the least. Exhibiting a rare fluency in the sartorial understanding of what suits him the best, he has tamed the word OTT to the T. Karan Johar and his fashion stylist Nikita Jaisinghani are an amicable duo who never fail to do things differently. Men’s fashion in India is often deemed as underrated and nascent. But storming the scene with that unflinching attitude in tow, Karan Johar quite rightly turned showstopper for the snazzy fashion designer duo, Falguni and Shane Peacock at the Lakme Fashion Week Summer/Resort 2018. While he effortlessly dabbles movie production, direction, hosting of his frivolous talk show, Koffee With Karan and debatable acting skills (Bombay Velvet and Welcome to New York), he is also the father to adorable munchkins, daughter Roohi and son Yash. Additionally, he is the quintessential Mr Congeniality of tinsel town, known for those lavish parties attended by the who’s who of tinsel town! Born on 25 May 1972, Karan Johar turns 46 today – it would be quite safe to say that he seems to be defying age and how!

Karan Johar’s Instagram feeds are a lesson in living life to the fullest! A selfie-obsessed signature pout poser, Karan Johar’s fashion arsenal is a delightful mixed bag of bespoke suits (embroidered and classic), metallic bomber jackets, shimmery boots, zany shades and an overload of patterns and prints. Here’s why we cannot stop obsessing over Karan’s obsession for the sassier version of fashion and style.

Dear Karan Johar, happy birthday! As an unstoppable fashion force, your style arsenal is above all that BLING, SASS and SPUNK – Here’s why! 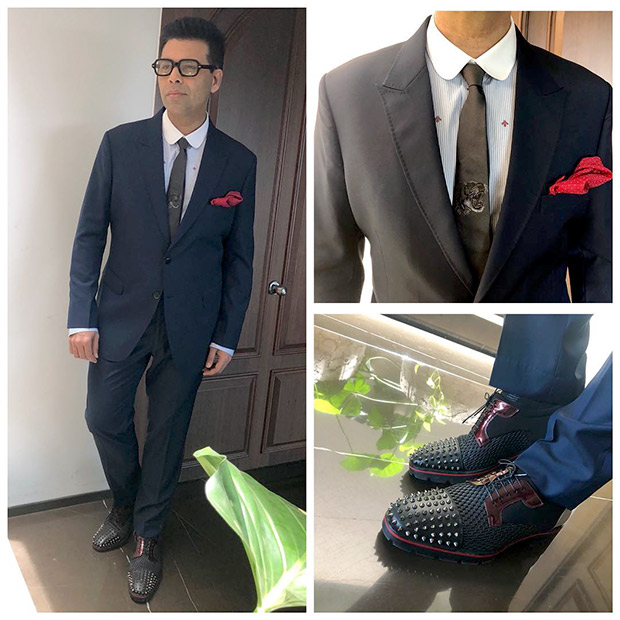 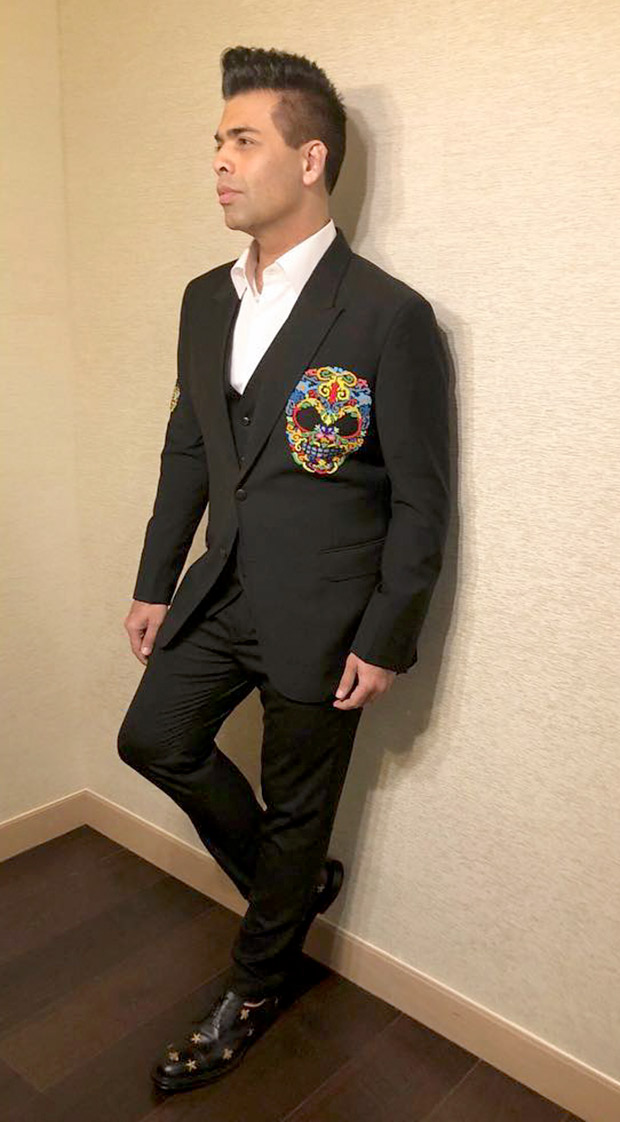 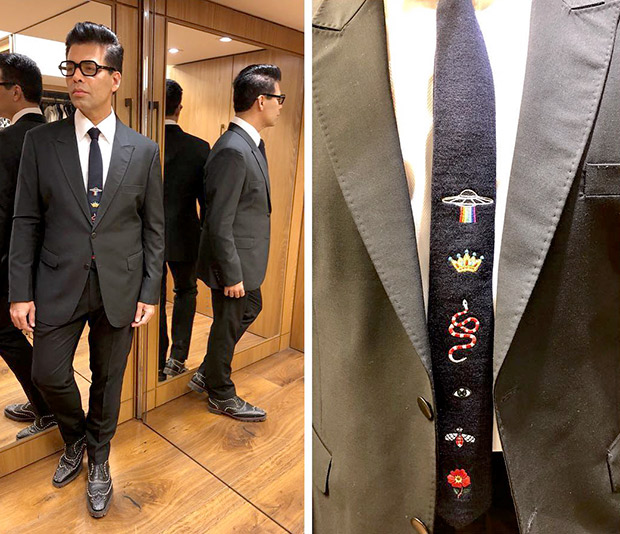 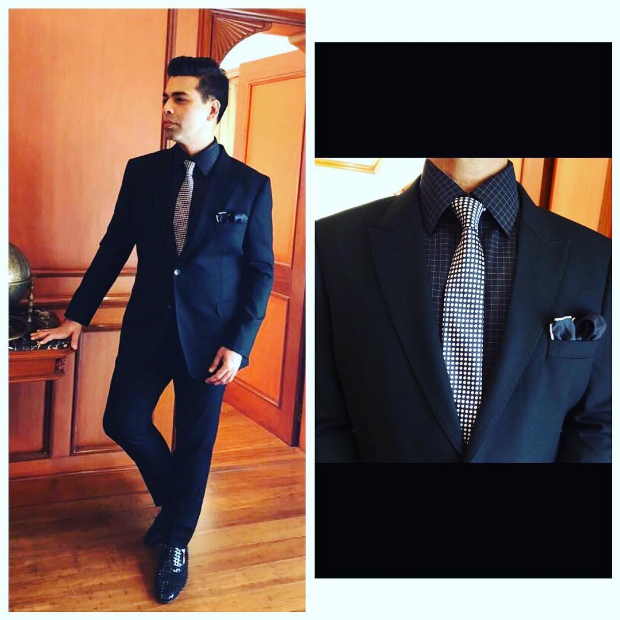 Imbibing checks and dots, courtesy of Hugo Boss, Karan cut a striking picture in this suit. 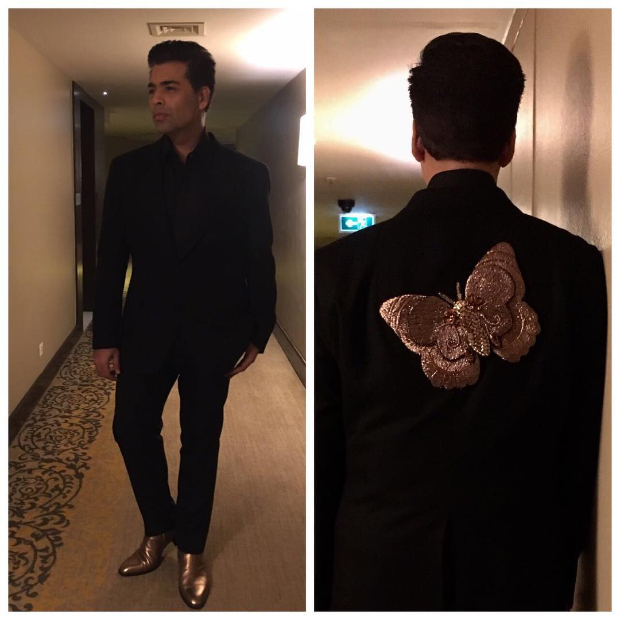 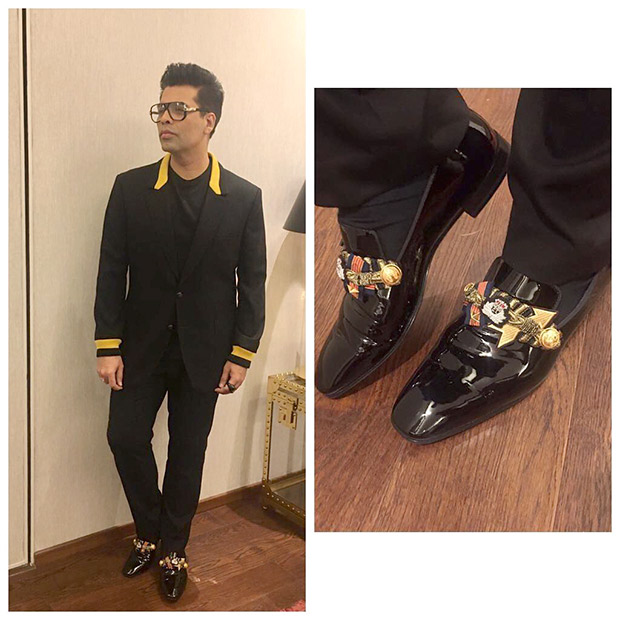 Karan’s astonishing pair of Christian Louboutin shoes spunks up his all-black look in a jiffy! 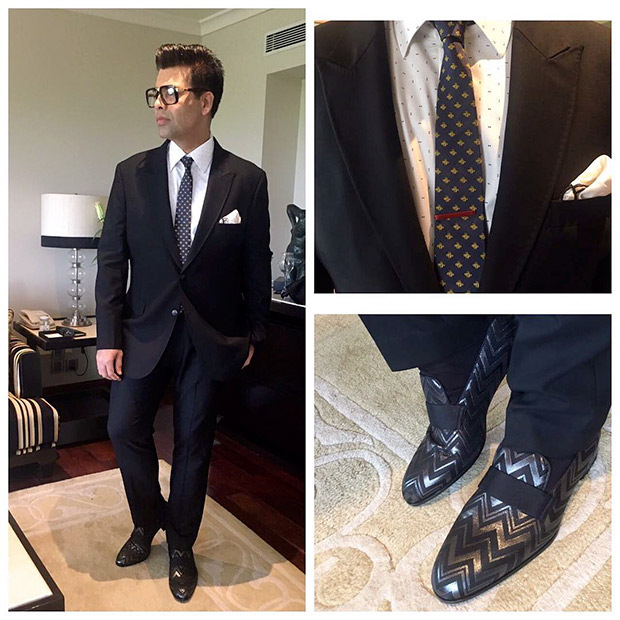 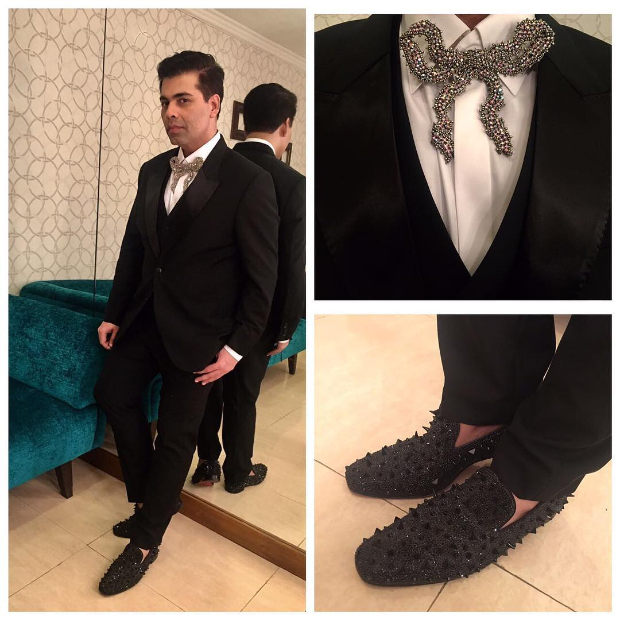 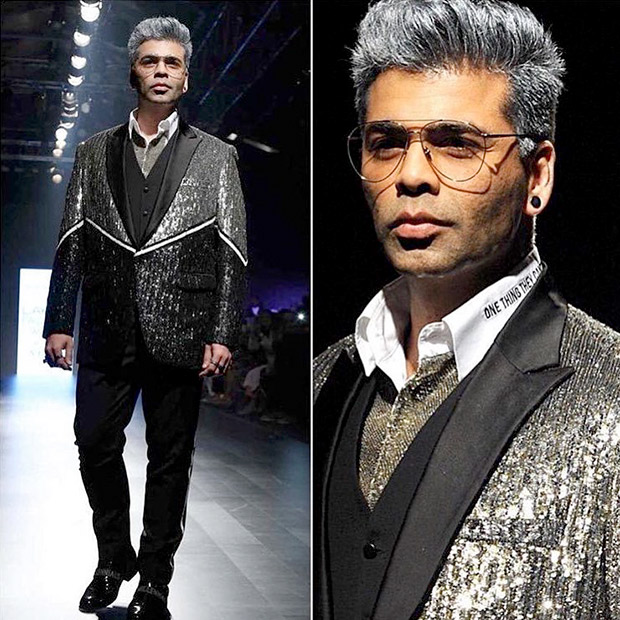 Karan donned a Falguni and Shane Peacock shimmery suit and aced it with vintage frames and silver fox-esque hair. 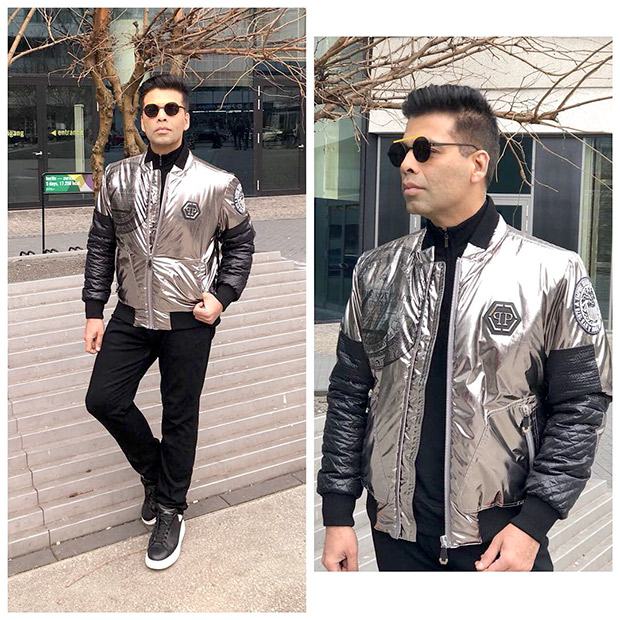 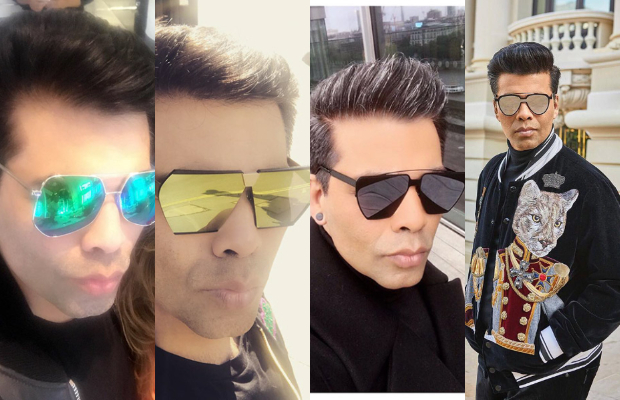 Karan has always showcased his love for sunnies – the quirkier the better!

Also Read: Karan Johar’s selfie with baby Yash is the cutest pic you will see today 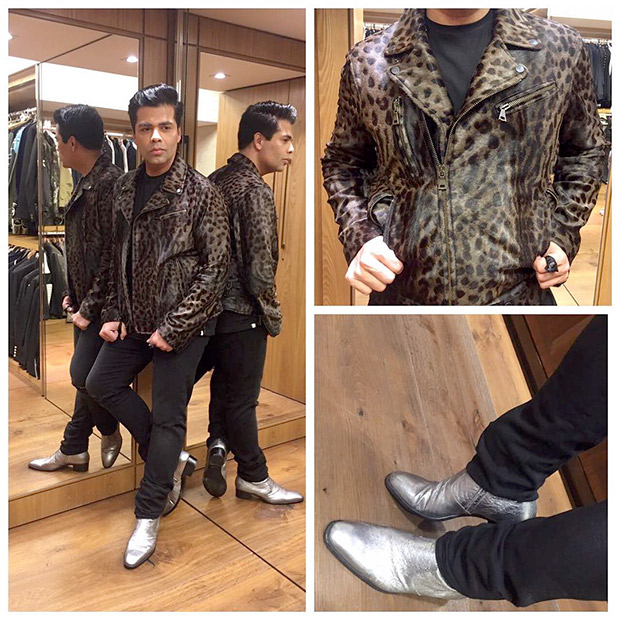 Karan tapped on the animal print with a D Squared 2 jacket and quirked it further with John Varvatos metallic shoes. 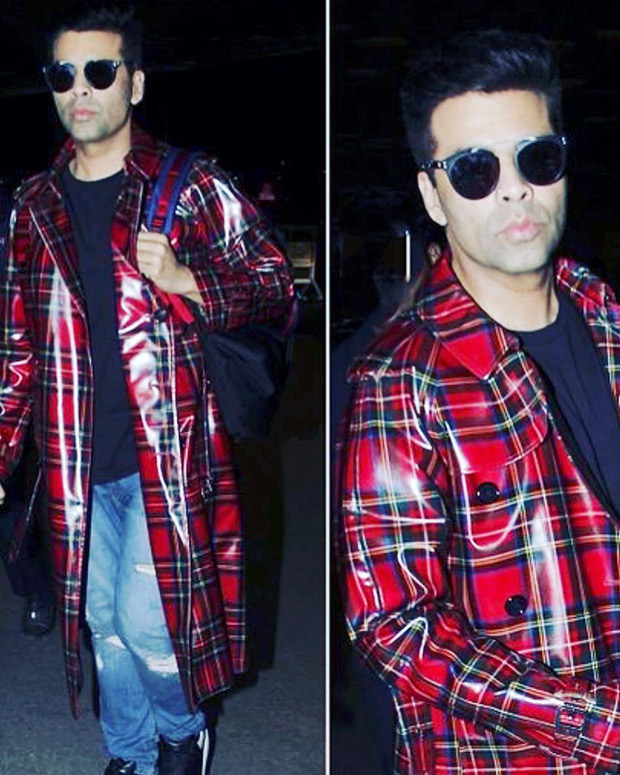 Plaid never looked so jazzy until Karan chose it while travelling to Berlin. 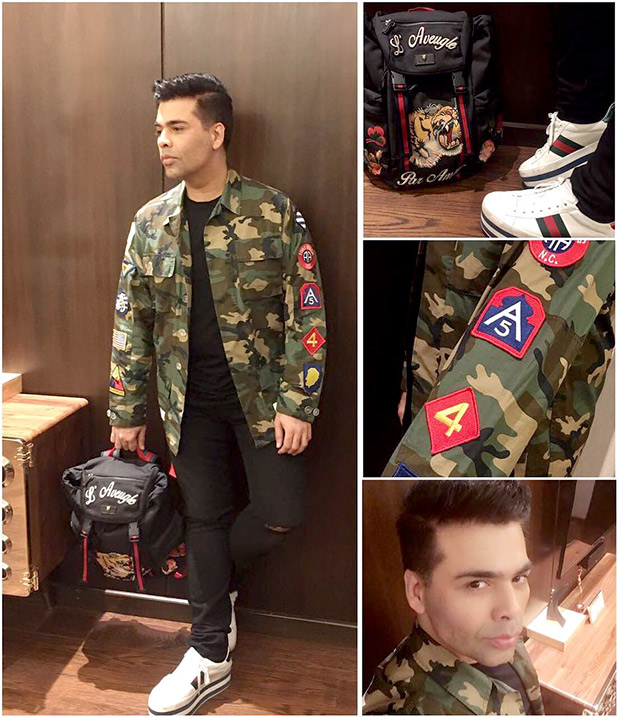 Karan loves camouflage and flaunted a patchwork one with an Off-White bag and Gucci shoes.

With an innate sense of what does and does not fit well, Karan Johar and his affair with super fashionable outfits and accessories with a bit of flair for the dramatics is what defines his persona. Happy Birthday, Karan Johar!