With many celebrity kids making their way to Bollywood, Saif Ali Khan and ex-wife Amrita Singh’s daughter Sara Ali Khan is all set to enter the big world of Bollywood with her debut film, Kedarnath. The film has been in news lately as the producers and director were at loggerheads. Now, everything has been cleared and the next schedule has begun. Meanwhile, Sara Ali Khan has also been making waves for the appearances and red carpet shenanigans and fashion choices. 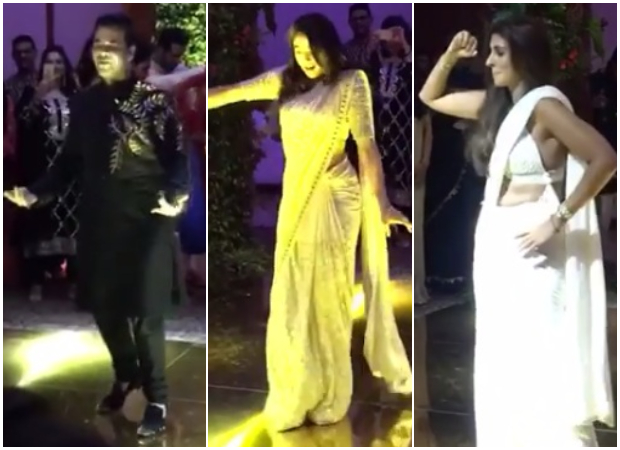 But, who knew she could dance so well? Sara Ali Khan attended designer Sandeep Khosla's niece's wedding on April 21 and left the audience in shock with her performance. She took over the center stage to groove to 'Saath Samundar' in the most sensuous way possible. Dressed in a gorgeous golden saree, Sara left everyone cheering for her with her nakhres and thumkas. One could understand that the girl is all set for the big Bollywood world.

It wasn't just Sara Ali Khan who wowed the audience. Karan Johar, who pretty much loves dancing, took the stage to dance on his film's song ‘Radha' from Student of the Year. From proper desi moves to thumkas, Karan was enjoying every bit of it. Even Sonam Kapoor's mom Sunita Kapoor and Jaya Bachchan could not stop themselves from the desi 'Nazar utarna'. He looked dapper in a black sherwani with heavy work.

Even Amitabh Bachchan- Jaya Bachchan's daughter Shweta Bachchan took the stage for her performance. Mommy Jaya was pretty happy to see her daughter groove to the Hindi song.

On the work front, Sara Ali Khan starrer Kedarnath with Sushant Singh Rajput and helmed by Abhishek Kapoor is due for Christmas 2018 release. In the same month, her second film Simmba starring Ranveer Singh will release. Directed by Rohit Shetty, the film will release on December 28, 2018.