WELCOME TO NEW YORK (WTNY), directed by Chakri Toleti and produced by Vashu Bhagnani’s Puja Films releases this week along with Luv Ranjan’s SONU KE TITU KI SWEETY. WELCOME TO NEW YORK stars Sonakshi Sinha, Diljit Dosanjh and Karan Johar in pivotal roles and has an entire entourage of Bollywood A-listers making cameos as it is based against the backdrop of IIFA Awards. The film is meant to be a satire on the Hindi film industry and the two leads Diljit and Sonakshi play underdogs who make it big in Bollywood, despite coming from a humble background. 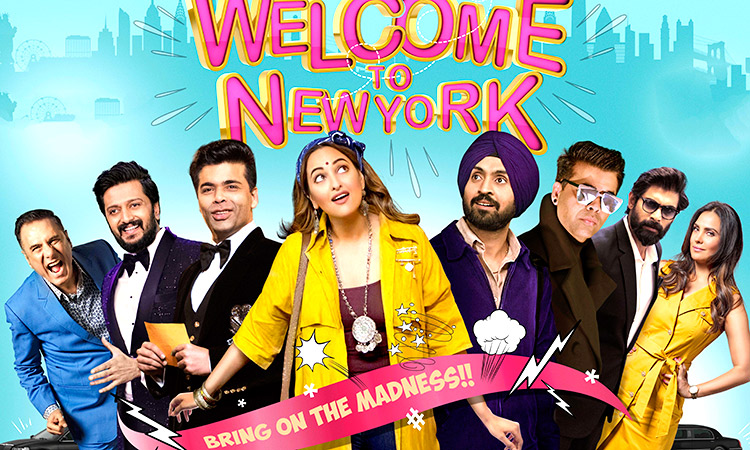 The movie is about a sloppy recovery agent Teji (Diljit Dosanjh) who dreams of being an actor and a ‘dhinchaak designer’ Jinal (Sonakshi Sinha) who wants to escape from her dreary life. They win a contest and are selected to showcase their talent at the IIFA Awards by Sophie (Lara Dutta) who is a part of the organising team spear headed by Gary (Boman Irani). Sophie purposely selects the ‘two losers’ Teji and Jinal in order to settle scores with her Gary, who refuses her partnership in the company. The entire film is supposed to be a comedy of errors with both Teji and Jinal winning Bollywood fraternity’s hearts with their genuine talent. What it turns out to be is a whole different story. In between all this is the main celebrity host of the show Karan Johar, who has his own set of issues with the organiser Gary. But at the same time, Karan is also under threat of being kidnapped by his lookalike NY based gangster Arjun (Karan Johar) who wants to punish him for making romantic films. Riteish Deshmukh, who is the co-host of the show, uses this situation to his own selfish benefit. In between all this chaos behind the scene, IIFA awards take place in New York.

Karan Johar, in his double role as Karan (the director and head honcho of Dharma Productions) and Arjun (the gangster) manages to keep the movie engaging. There is a lot of self-referencing and self deprecative humour (be it about his sexual orientation or his movies) which does make you laugh at quite a few places. Diljit Dosanjh as the goofy Teji Singh is adorable. His comic timing is impeccable. Sonakshi Sinha is lost throughout the film and is not very convincing. Even a dream sequence with Salman Khan does nothing to the character that is weak. Boman Irani as the stressed out, snarky stooge managing the event looks solely disoriented as he flits listlessly around from frame to frame. Lara Dutta tries to save the film as she does her part in whatever little scope she has been offered. Salman Khan, Sushant Singh Rajput, Katrina Kaif, Aditya Roy Kapur and Riteish Deshmukh ‘s cameos look forced and out of the sync.

The first half of the film manages to keep one engaged because the writers Dheeraj Rattan and Sara Bodinar create some interest in the lead characters after they land in New York and there is a certain curiosity about who Karan’s doppelganger is and why he wants to harm the Dharma Productions’ head honcho so bad. Director Chakri Toleti’s comedy of errors goes wrong especially in the second half because whole plot of the film goes out of the window, due to the lack of a proper script.

Editor Ritesh Soni has kept the film at two hours, five minutes instead of making it even more long and exhaustive. The film’s music is forgettable except for the last dance number ‘Pant Mai Gun’. Cinematographers Neha Parti Matiyani and Santosh Thundiyil do an average job.

On the whole, WELCOME TO NEW YORK comes across as a blatant endorsement of IIFA with a handful of funny gags thrown in here and there. The impeccable comic timing of Diljit Dosanjh and Karan Johar's funny take on himself and the industry act as the saving grace. At the box office, the movie will have very limited scope.

Really awesome movie and I just enjoyed it. And you will sure don't miss the other star casts to…