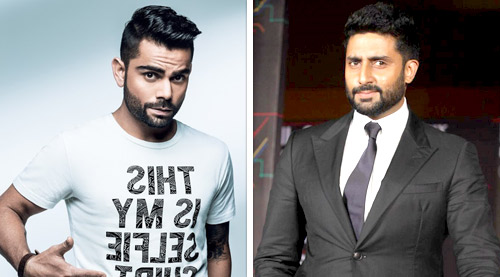 While Abhishek Bachchan and his football team have already been involved in charity fundraiser matches, this time around, playing opposite them will be the team under the Virat Kohli foundation. Cricketers and Bollywood are collaborating for a friendly football match called Celebrity Clasico 2016, which will be held on June 4 in Andheri Sports Complex, suburban Mumbai.

Abhishek Bachchan's All Stars Football Club consists of prominent names like Ranbir Kapoor, Arjun Kapoor, Aditya Roy Kapur, Shoojit Sircar among others while the All Hearts Football Club headed by Kohli consists of some renowned cricketers like M S Dhoni, Harbhajan Singh, Yuvraj Singh, Ajinkya Rahane, R Ashwin among others. The aim of this match is to raise funds for the charitable causes which Virat Kohli Foundation and Playing for Humanity are working towards.

Besides this, Abhishek Bachchan's football team will also lock horns with the politicians' team for yet another charity initiative.